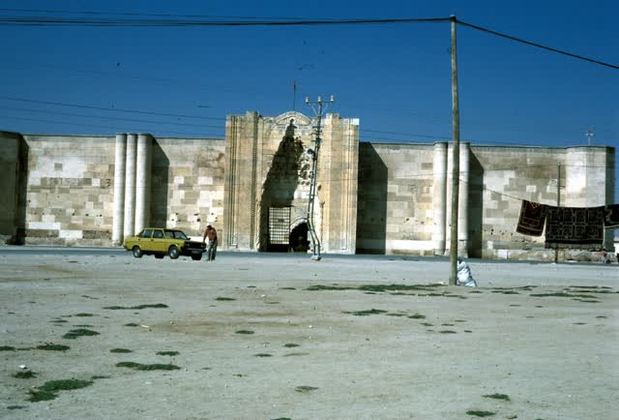 Share
The Sultanhani on the road between Konya and Aksaray is the largest caravanserai in Turkey, enclosing 4,900 square meters. Commissioned in 1229 by Sultan Alaeddin Keykubad I, it was built by the architect Muhammet of Syria. As one of the Sultan's Han, the building is a caravanserai with palatial aspects. Incorporated into the plan is a large courtyard with a two- story masjid in the center, a monumental covered hall, and a hammam (bath).

The monumental pishtaq is 50 meters wide and projects out from the main wall of the khan. The single entrance is in an ornately carved recess surmounted by stalactite muqarnas. Once inside the caravanserai the masjid dominates the courtyard. The square stone building sits on carved arches, effectively lifting it off the ground. The prayer room is on the second floor, accessed by a twin stairway on the front. Surrounding the courtyards on the entrance wall and both sides are iwan arcades which served as stables on the ground level and accommodations above.

Directly across the courtyard from the main entrance is another portal to the covered hall. The arched entrance is constructed with joggled voussoirs above which is a stalactite muqarnas niche set within a border of interlocking geometric carving. The covered hall has a central aisle with a stone barrel vault built of cut limestone blocks. The vault is stiffened with transverse ribs and flanked by a nave on either side. The vault meets a short tower at its center, which is capped by a dome. The dome has an oculus, which serves as the main source of light and air.

Stierlin, Henri, and Anne Stierlin. Turkey, from the Selçuks to the Ottomans, 240. Köln, Germany: Taschen, 1998.