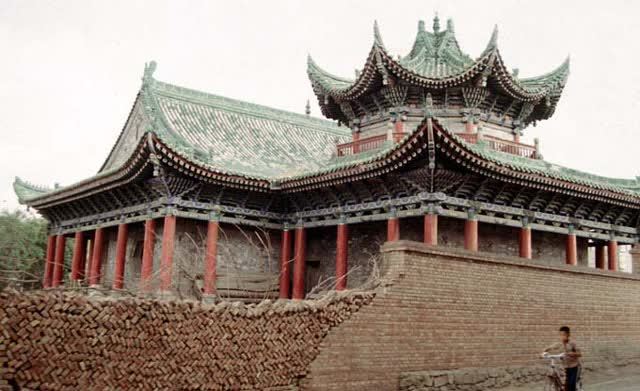 Share
The Shaanxi Mosque is a rare Hui Chinese mosque in the predominantly Uygur city of Urumqi. This mosque was built during Qing Dynasty rule under the reign of Emperor Qianlong (1735-1796) or Emperor Jiaqing (1796-1820). It was renovated and expanded in 1906 under Emperor Guangxu (1875-1908).

The mosque is built in the Han Chinese architectural tradition of pavilions with upswept eaves made of timber beams, columns and brick and also manifests Islamic influences from the west in its use of glazed tiles. It consists of an elevated prayer hall within a high-walled precinct, marked by the bangke tower crowning its mihrab chamber. The precinct is entered from an arched brick gateway.

The east-facing prayer hall stands ten meters tall and covers an area of 250 square meters, sizable enough to accommodate 500 worshippers at a time. It is set upon a stone platform accessed by two staircases and enveloped by a narrow portico on all sides. The portico is defined by thick round wooden columns, which are painted red and set on carved stone bases. Behind its columns stand the brick, unrelieved walls of the prayer hall, except for the eastern façade where latticed and lacquered panels form the entrance.

The prayer hall has a T-type plan, consisting of a main hall and a mihrab chamber that projects, west towards the main hall, which is covered by a green-tiled hipped roof with flaring eaves. A bangke tower, a multistory pagoda with multiple eaves traditionally used for moon watching crowns the mihrab chamber. Expressively upswept eaves, particularly those of the pyramidal bangke tower roof, reveal vibrantly polychromatic woodwork featuring sets of heavy, curved dougong brackets. The roof ridges are decorated with crenellations, dragons and other animals, much like at the Great Mosque of Xi'an, and a modest crescent finial arises from the center. Below the eaves of the bangke tower is a balcony protected by latticed balustrades.

The interior of the hall is divided into five rows with columns similar to those of the portico. Overhead, vibrantly painted beams display ornate floral, as well as pictorial, scenes. The mihrab chamber is dominated by the magnificent octagonal caisson ceiling of the bangke tower. Each of the three dougong bracketed octagonal rings are marked by eight wooden lotus shaped stalactite drops, painted in various hues of orange to accentuate the sense of depth. At the base of this elaborate roof structure are screened windows and panels with idyllic painted scenes.