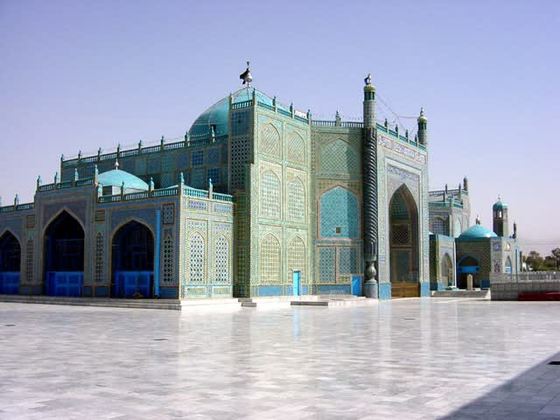 Share
Rawza-i Sharif or Mazar-i Sharif (lit. Tomb of the Exalted) in northern Afghanistan is considered by Afghan Shi'a to be the final resting place of fourth caliph 'Ali bin Abi Talib (d. 661 A.H.). Legend contends that the caliph's body was moved from Najaf to a secret tomb near Balkh, which was "re-discovered" by a mullah in the village of Khwaja Khayran in early twelfth century. Seljuk sultan Sanjar erected a shrine on this site in 1136, which was probably destroyed in Mongol invasion of 1220. Timurid sultan Husain Baiqara (1469-1506) built the present shrine in 1480-81/885 A.H. furthering to the town's development into a large urban center. The shrine was restored extensively in the mid-twentieth century and draws Shi'a pilgrims throughout the year, and especially during the celebration of New Year (Neuroz).

The shrine is roughly rectangular in plan, and measures about fifty-three meters by thirty-eight meters at the largest. It is aligned northwest-southeast and is enclosed within a fenced precinct that includes the large mosque built in mid-twentieth century to the southwest of the shrine. A site plan of the shrine complex sketched by Niedermayer in 1916-1917 shows a smaller walled precinct, with bazaar streets leading out from the shrine to the southeast and, possibly, to the northwest. These historic structures were razed to create parklands later in the twentieth century, leaving only their monumental portals that now serve as gateways for the shrine. The taller northwest gateway faces the shrine with a grand pishtaq flanked by bi-level loggias and tall engaged minarets. It is included inside the paved grounds whereas the southeast gateway - a similar structure with a shallow arch and shorter minarets on the shrine side - is incorporated into the precinct fence and serves as the main entrance. (Its tiled street facade was built after the destruction of the adjoining bazaar.) The northeast gateway, which is seen as a gateway in Niedermayer's photographs, has a simpler structure composed of a screen wall pierced by twin archways.

The Timurid core of the shrine contains the tomb chamber of Ali and its ziaratkhana, whose blue-tiled domes rise above the shrine's roofline. A grand pishtaq flanked by bi-level loggias leads into the ziaratkhana, an ante-chamber dedicated to prayer and worship, from the southeast. Inside, the chamber has a cruciform plan extended with polygonal bays to the northeast and southwest. It is covered with a central dome about ten meters in diameter and opens into the caliph's room to its northwest. The larger tomb chamber is also cruciform in plan and is crowned by a taller dome of about fifteen meters in diameter. A doorway is centered at the end of each cross arm: the northeast door leads into an octagonal chamber that projects beyond the shrine's wall, while the northwest door opens onto a triple-domed portico, now enclosed with wooden screens. The southwest doorway, now a view-window with a metal grill, belongs to the monumental side portal.

Tombs of various shape and size belonging to Afghan rulers and religious leaders were added to the Timurid shrine through the centuries, creating its current irregular profile. The square domed tomb of Amir Dost Muhammad (1826-1863) and his family adjoins the southeast portal to its southwest. A similar tomb containing the graves of Amir Sher Ali (1863-1879) is located between this tomb and the side portal on the southwest facade.

The shrine's exterior is covered entirely with polychrome tile mosaic and painted tile panels dominated by shades of blue. Many of these tiles were renewed or replaced during twentieth century renovations. A continuous parapet and decorative turrets unify the jagged cornice line. Timurid interiors of the shrine have retained their original squinch-net vaulting; their epigraphic decoration, on the other hand, is mostly from the nineteenth century. The interior of the ziaratkhana dome, which is adorned with concentric rows of muqarnas on a sixteen-sided base, features painted arabesque decoration that may be of the Timurid period. The shrine has a rich treasury that contains, among other objects, a marble slab remaining from the Seljuk shrine inscribed with the words "Ali, Lion of God."