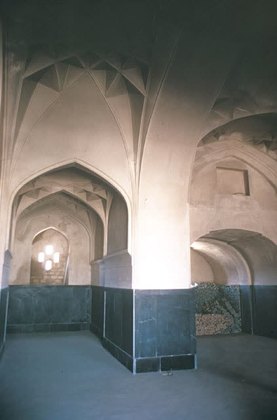 Share
Parizad Madrasa is embedded in the Imam Riza Shrine Compound, with the Bala Sar Madrasa to the northeast and the court of the Gawhar Shad Mosque to the southwest. It is aligned with the main shrine and the Gawhar Shad Mosque along the northeast-southwest axis. An inscription dated 1680 commemorates the Safavid restoration under Shah Sulaiman I (1666-1694) and although there is no record of its construction date, the madrasa's relationship to the Mosque and chambers commissioned by Timurid Queen Gawhar Shad in the complex, suggest that it was built at the same time or later than those structures, in the early fifteenth century.

Similar in its overall composition to the adjacent Bala Sar Madrasa, Parizad Madrasa is centered on a rectangular four iwan courtyard with beveled corners. It is also entered from the bazaar arcade to the northwest which adjoins the madrasa at a slight angle.

Each of the four iwans is flanked by a room on either side on two floors. The lower rooms are accessed through arched niches while the upper rooms are entered from a continuous arcade of arched balconies. The spandrels of the upper floor archways are taller than those of the first floor, leading some scholars to believe that they were raised at least one meter from their original height. The chamfered corners of the courtyard are pierced with doorways that lead to more rooms and to stairs leading to the upper floor. All the rooms vary in size and shape.

The vault of the northwest entrance iwan was covered with a plaster muqarnas during the Safavid restoration and is believed to have the original tilework underneath. The southeast iwan, facing the entrance, has a diamond brick pattern infilled with floral tiles, most likely the only original tilework now present. It leads into a cross-shaped dome chamber, linked to another at the southern corner. These dome chambers have groined domes pierced with oculi. Aside from a stone dado and stucco groins at the junction of the vaults, these chambers lack decoration. The northeast iwan is very deep and also lacks decoration, while the southwest iwan across from it is decorated with tilework and is considerably shallower. The southwest iwan is in the qibla direction and has a small mihrab centered on its rear wall.