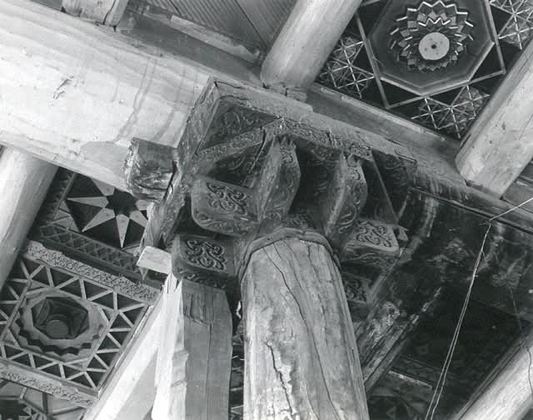 Share
The Friday Mosque of Abyanah is located approximately 38 kilometers northeast of Natanz. Abyanah is a remote village in a valley of the Karkas Mountains where wood is relatively plentiful, and it is the primary construction material of the mosque. Dated from the Seljuk period, when brick was the preferred construction material, this is a rare example of the use of wood in the construction of a mosque. It is not certain who patronized the construction of the mosque, although a recorded restoration period undertaken in 1322 is attributed to a Mawlana 'Izz-al-din bin Muhammad Baha' al-Din.
The mosque has a hypostyle type layout with a flat roof and wooden columns. There are two octagonal shaped wooden columns on either side of the mihrab axis. These are topped by square capitals with projecting brackets that are carved with floral motifs.
A wooden mihrab is found in the sanctuary of the mosque which is flanked with carvings of various patterns in wood and a chapter from the Quran. A date inscribed on it reveals that it dates from the fourteenth century. It is the only recorded example in Iran of a mosque with a wood mihrab. Built by the order of Abu Ja'far Mohamed in 1084-85, it measures approximately 2 by 1.08 meters.
A wooden minbar, originally built in 1073-1074 and restored numerous times, can also be found in the interior of the mosque. It is extensively decorated with carvings of both inscriptions and floral motifs.
The wood surfaces of the ceiling are also carved with floral and geometric motifs, as well as painted with floral designs.
Sources: