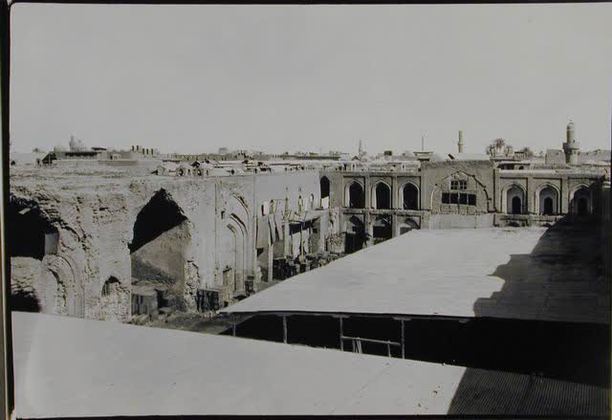 In 1227/625 AH, the thirty-seventh Abbasid Caliph al-Mustansir Billah (r. 1226-1242) commissioned the construction of al-Madrasa al-Mustansiriyya, a theological school in the capital city of Baghdad named in his honor. Construction lasted for six years and the school opened in 1234/631 AH. In addition to being one of the oldest madrasas that still stands, the Mustansiriyya is doubly significant as the earliest example of a universal madrasa: that is, a theological institution in which all four madhabs (rites) of orthodox Islamic law were taught.1

Although descriptions contemporary to the foundation of the school do not exist, later medieval descriptions suggest that the complex originally comprised the theological school, a library, a hospital, and a pharmacy. The library may have been ravaged during the Mongol raid and occupation of Baghdad. We know that the building eventually fell out of use as a school and became something of a caravanserai.

We know that craftsmen occupied the building as early as 1750/1163 AH from the report of Carsten Niebuhr, a European traveler who recorded the inscriptions on the madrasa during his travels in Iraq. A century later in 1865, the madrasa was converted to a customs office under the Ottomans. By 1945, however, the Iraqi Directorate of Antiquities had initiated a campaign to restore this historic monument and cleared the surrounding area from shops and structures. In 1960, the restored madrasa became a museum for Islamic art and culture (The Museum of Islamic Art in Baghdad).

The madrasa is a rectangular complex situated on the east side of the Tigris on the downstream side of the Shuhada’ Bridge, right on the riverbank. In the early twentieth century, it was surrounded by souqs. Today, the immediate commercial district around the madrasa has been demolished to return the site to its original borders.

The main entrance is a monumental portal that projects from the façade of the building’s northeastern side. The relatively small arched doorway is set within a recession in the shape of a pointed arch. Surmounting the doorway within the recession is a field of geometric ornament, topped in turn by the 10-line foundation inscription of Mustansir. Framing this recession are three concentric moldings with variations on geometric star-and-polygon patterns, each following the contour of the pointed arch.

The madrasa’s southwestern, river-facing façade is adorned with a geometric pattern of interlocking zigzags formed by square brick plugs that project from the façade. Below this is a monumental inscription band describing a restoration that Ottoman Sultan 'Abd al-'Aziz stretches the length of the river façade commissioned in 1865. This may replace an older inscription.

The entrance portal leads to the rear of an iwan that opens directly onto the building’s central courtyard through an ornate portal. This portal consists of three archways: the central archway is fully open and leads onto the iwan interior itself while the two side arches are blind except for small doorways cut into their base that give onto enclosed rooms behind. All three are set within a large rectangular block rising above the height of the surrounding building that is divided into fields decorated with various carved geometric patterns.

Directly across from the entrance portal, on the long southwestern façade of the courtyard, a three-arched portal of nearly identical composition opens onto the madrasa’s prayer hall. In the prayer hall portal, all three arches are fully open.

Flanking the entrance iwan and prayer hall portals on each side are arcades on two stories, each with six pointed archways. The first pointed archway on each side gives onto a stairwell communicating between first and second stories, and the other five lead onto a covered portico. Five doorways on the rear wall of the portico give onto narrow cells that would have been used as bedchambers.

On the courtyard’s southeastern and northwestern short sides, a large central iwan rising two stories is flanked on either side by arcades on two stories, with three archways per story on either side. These archways give onto a portico leading onto cells and hallways that lead behind the cells to other service rooms.