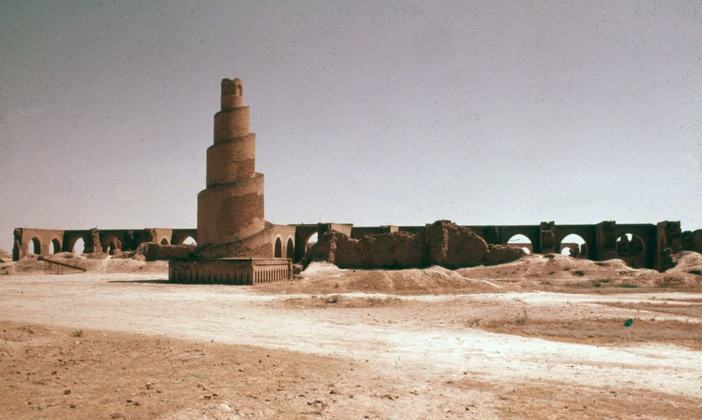 Between 859/245 AH and 861/247 AH, the Abbasid caliph al-Mutawakkil relocated the court from Samarra to a new settlement that he named al-Mutawakkiliyya, located to the north of the original city founded under Mu'tasim. Within the new city he constructed a congregational mosque known locally as Jami' Abi Dulaf (Abu Dulaf Mosque). The mosque resembles Mutawakkil's congregational mosque in Samarra in several important ways although it is not an exact replica.

The mosque stands toward what was the center of Mutawakkiliyya, west of its main arterial avenue that led through the town toward the palace, located at the city’s northern edge.

Similar to the congregational mosque at Samarra, the Mosque of Abu Dulaf consists of a large rectangular building constructed exclusively of baked brick with a central courtyard and hypostyle prayer hall. Surrounding this building is an outer enclosure or ziyada. The ziyada measures 350 x 362 meters and the rectangular courtyard building 213 x 135 meters. Its minaret also recalls the Samarra mosque in its spiraling form and position on the north side of the rectangular building.

The walls of the mosque building remain partly standing, mostly on the northern side. Forty semicircular towers support the outer wall of the mosque, including four at the corners. Traversing the ziyada, visitors to the mosque could enter through a number of gates on any the mosque’s east, north, and west sides. The two long sides (east and west) each have six entrance gates whereas the north side has three.

A large rectangular courtyard occupies the center of the mosque building. Surrounding the courtyard on all sides are arcades (riwaqs) resting of piers built of baked brick. The north side is three aisles deep, the east and west sides are two aisles deep, and the prayer hall on the south side is seven aisles deep. Notably, the prayer hall features a broader central nave and two aisles nearest the qibla wall distinguished by wider piers.

Behind the mihrab is a structure consisting of a central room flanked by four iwans and side chambers. This structure was most likely a rest house for the caliph, who traditionally entered the mosque from behind the qibla directly onto the prayer hall.

The minaret includes a spiral ramp rising from a square base adorned with small recesses on each side. Later excavations show that surrounding the minaret was a court with blind arcades like the ones on the socle. This court featured two cisterns.

Excavation work executed in the 1940s by the Iraqi Department of Antiquities provides evidence of a double riwaq that extended from the main walls of the mosque off the northern façade and parts of the eastern and western ones, for increasing crowds at Friday prayer.

al-'Amid, Tahir Muzaffar. The 'Abbasid Architecture of Samarra in the Reign of both al-Mu'tasim and al-Mutawakkil, 209-43. Baghdad: al-Ma'aref Press, 1973.