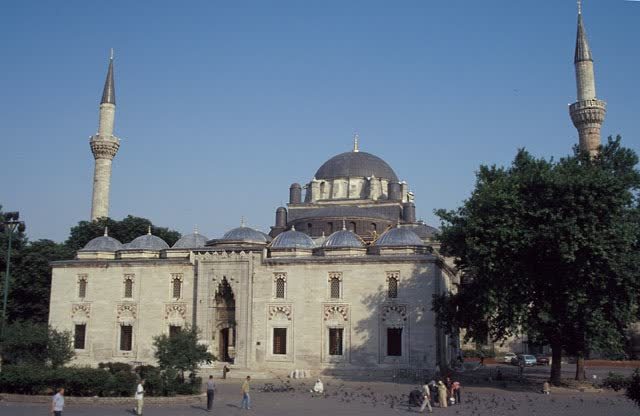 Share
This complex and its surrounding neighborhood and square, all named after Ottoman sultan Bayezid II, was built between 1500/906 AH and 1505/911 AH on the grounds of the Forum Theodosius (Forum Tauri) in Istanbul. This had been the original site of the Roman capitol. Situated on a hilltop between the Mese (the main route of the historic peninsula) and the former site of the old Ottoman palace (Saray-i Atik), the complex consists of a mosque (cami), madrasa (medrese), soup-kitchen (imaret), Quranic school (mekteb), caravanserai (han), baths (hamam) and two tombs (türbe). The design is often attributed to head-architect Mimar Hayreddin, while some scholars have proposed a major role for lesser-known Yakupsah bin Sultansah. It is the second large Ottoman complex built in Istanbul after Fatih, and the third complex built by Bayezid II (1481-1512) after Amasya and Edirne. It was operated with the income of Pirinç Han in Bursa and a han, bedesten and baths in Salonica.
The buildings of the complex are placed without any apparent order on the large site, with no traces of an outer precinct wall. The soup-kitchen, caravanserai, Quranic School and the tombs are clustered around the mosque to the west, while the madrasa and the baths are separated out, positioned about 120 and 250 meters to the west of the mosque, respectively. The mosque dome was partially rebuilt after the 1509/915 AH earthquake, and Mimar Sinan conducted repairs in 1573-1574/981 AH. The minarets were burnt separately in 1682-1683/1093 AH and 1746/1156 AH and the dome was repaired again in 1754. An inscription above the northeast courtyard entrance suggests that repairs were also conducted in 1767. A restoration is currently under way at the mosque, while the madrasa, baths and Quranic school were restored at different dates to house library and museums.
Although the buildings have remained largely intact, changes in the layout of Beyazit Square throughout the nineteenth and twentieth centuries have transformed their context. Old photographs show that the east end of the square was an informal extension of the market neighborhood beyond the mosque, with tree-shaded cafes around the main courtyard entrance. The old Ottoman Palace to the northwest of the mosque was replaced with the large neo-classical campus of the Ministry of Defense in 1867, with a tree-lined road leading to its monumental gate passing between the mosque and the madrasa. The complex was cut off from the street when Yeniçeriler street was lowered in the mid 1950s, when the square was redesigned as a paved open plaza with multiple levels, and renamed Hürriyet (Liberty) Square.
The mosque

The mosque is oriented along the northwest-southeast axis and is preceded by a courtyard to the northwest. Three monumental portals, facing northwest, southeast, and southwest, lead into the square open courtyard, which is enveloped by the domed arcade and the mosque portico. The ablution fountain at the center of the courtyard was renovated with a roof during the rule of Murad IV (1623-1640/1032-1049 AH). The courtyard arcade hosted an open bazaar each year during Ramadan until the 1920s.
The prayer hall is entered through a muqarnas portal from a portico. It is the same size as the mosque courtyard and consists of a domed central space extended with two semi-domes along the qibla axis and side arcades covered with four small domes. The central dome, which measures 16.80 meters in diameter at a height of fourty-four meters, is carried on four colossal piers that are woven into the colonnade separating the side arcades from the main space. A sultan's lodge (hünkar mahfili) occupies the qibla end of the southwest arcade and is accessed primarily from the exterior. There is a muezzin's lodge (müezzin mahfili) adjoining the inner side of the western pier. The space is lit with twenty windows at the base of the dome and seven windows on each semi-dome, in addition to two tiers of windows on the walls.
Hospice wings designed to host wondering dervishes, a common feature of early Ottoman mosques, are also seen here adjoining the prayer hall at the end of the courtyard walls. Originally designed as four domed rooms surrounding a domed central hall with separate access from the square, the wings were integrated into the prayer hall sometime during the sixteenth century and now consist of three consecutive rooms separated by archways. A small domed structure was added to the end of the southwest wing in 1767 to house the library of Seyhülislam Haci Veliyüddin Efendi. A cemetery with walls envelops three sides of the mosque, extending from the hospice wings to the main street. The side entrances into the mosque, which are located next to the hospice wings, are accessed through gates along the cemetery walls. Two minarets are attached at the outward ends of the hospice wings; the northeast minaret was rebuilt after an earthquake while the southwest minaret, restored in 1953-54, retains its original terracotta decoration.
The structure of the Bayezid mosque is considered a stepping stone between early Ottoman architecture and classical Ottoman architecture, characterized by a central dome held by semi-domes on all four sides. Although the mosque is constructed entirely of cut stone, colored stones and marbles appropriated from Byzantine ruins were used throughout the exterior and interior to highlight the architecture, such as red porphyry columns marking entrance bays along the courtyard arcade. Muqarnas carvings embellish all capitals and portals, the mihrab niche and minaret balconies. The minbar, the sultan's lodge and the women's section, which is a balcony placed above the prayer hall entrance, exhibit the fine stone latticework of the period and the original wood carvings can be seen on doors and windowpanes.
The tombs of Bayezid II and Selçuk Hatun

Selim I (1512-1520/918-926 AH), who succeeded to the throne after Bayezid II, built a tomb for his father behind the qibla wall of his mosque. Entered through an eighteenth century portico to the northwest, the tomb is a domed octagonal chamber illuminated with two tiers of windows. The interior, which houses the solitary sarcophagus of Bayezid II, has neo-baroque decoration from the late Ottoman period. Selçuk Hatun, one of the five daughters of Bayezid II, built her tomb during the construction of the mosque and was buried there upon her death in 1508. It is an identical but smaller structure found immediately to the east of the sultan's tomb. Both tombs are situated inside the walls of the mosque cemetery (hazire) where government officials and their families were buried beginning in the late seventeenth century. A small rectangular tomb in eclectic style was built for Resid Pasa at the southwest corner of the cemetery wall in 1857.
The Quranic school

The Quranic school (mekteb) is located in a small precinct adjoining the cemetery to the southeast, at the intersection of Yeniçeriler Road and Çadircilar Street. It is the oldest remaining school of its kind in Istanbul and consists of two domed rooms preceded by a five bay portico with a sloping roof to the northwest. The northeast room, which opens onto the portico with a wide arch, serves as an entrance into the second room. It has been used by the Tarik Us Library since its restoration in the 1960s.
The soup-kitchen and caravanserai

The Bayezid madrasa has a rectangular plan oriented along the northeast-southwest axis and is entered through a portal facing northeast. It consists of an arcaded open courtyard surrounded by domed rooms on three sides and a large classroom (dersane) on the forth side, which is aligned with the entrance across the courtyard. A roofed octagonal fountain is midway between the classroom and the entrance. Each madrasa cell is equipped with a furnace and shelving niche and has two lower and one upper window each, except for the larger corners cells which have an additional window. The classroom, which is twice as tall as the rooms, was assembled with alternating courses of brick and cut stone, in contrast with the plain stone structure of the rooms. The entrance was originally accessed from an enclosed precourt with a gate, which was demolished in the 1940s. One of the most important educational institutions of the Ottoman city, the madrasa was restored during the early Republican period to house the Municipal Museum, followed by the Municipal Library. Directorate of Religious Foundations (Vakiflar Genel Müdürlügü) who conducted a second restoration prior to the opening of the Religious Foundations Museum for the Turkish Calligraphic Arts at the Bayezid Madrasa in 1984.
The baths

The public baths (hamam) of the Bayezid complex, one of the largest in the city, is located on Yeniçeriler Road, at the corner of Beyazid Külhani Street. It is a double-bath with adjoining men's (east) and women's (west) sections. Both sections consist of a large dressing room, a cold room with two private cells and a hot room with four private cells, which open into each other, and a common furnace (külhan) at the northern end that heats up water drawn from a nearby well. The dressing room of the men's section is entered from the main road while the women's section is entered from the side street. Built at the same time as the mosque, the baths were donated to the religious foundation of Gülbahar Hatun, the wife of Bayezid II. A renovation was conducted following a fire 1714. The Bayezid baths are also known for masseur Patrona Halil, who is mistakenly thought to have been working there before he led the 1730 uprising that deposed of Ahmed III (1703-1730). Abandoned for many years during the Republican era, the baths were restored in the 1960s to house the central library of Istanbul University. 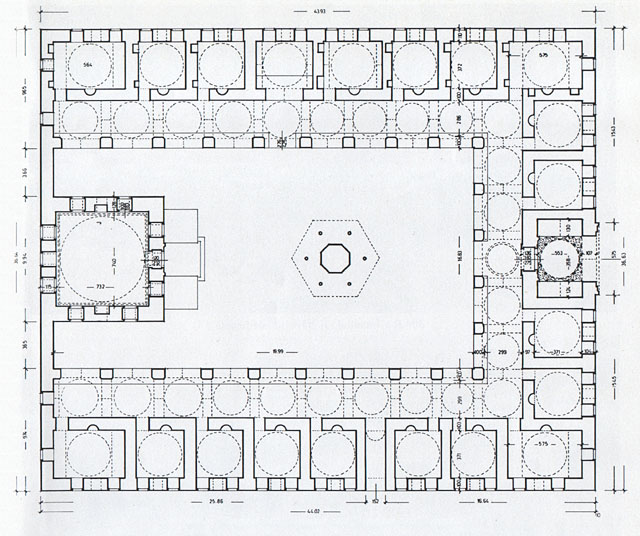