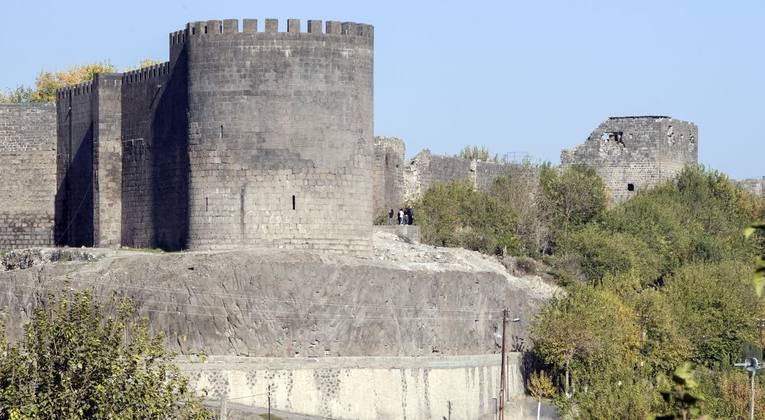 The walls of Diyarbakır are the longest pre-Modern city walls in existence, stretching more than five kilometers around the city’s oldest neighborhoods. Diyarbakır was first walled in the fourth century CE, and it is likely that the current walls roughly preserve the form of the original fortifications. However, the composition of the walls as they stand today mostly dates from the Islamic period, especially to the period between the tenth and thirteenth centuries/fourth and seventh centuries AH.

The walls were constructed of imposing masonry in black basalt (a stone of local origin). Their circuit roughly forms the shape of an oval, running along an escarpment on the west bank of the Tigris before turning westward, then dipping south, then north, and then back east.

There were originally 75 towers along the walls. All but six of these towers still stand. There are four original gates in the wall, Harput Kapısı (also Dağ Kapısı) in the north, Yeni Kapı in the east, Mardin Kapısı to the south, and the Urfa Kapısı to the west. The citadel of Diyarbakır is on a hill in the northeast corner of the wall, defended by its own ring wall built during the Ottoman period.

The location of the gates dates from the fourth century CE and preserves part of the original Roman city plan with two axial streets. The north-south axial street (cardo maximus) is still preserved and connects the Mardin Gate with the Harput Gate. The east-west street (decumanus maximus) is partly preserved and connects Urfa Kapısı with Yeni Kapı. The central market is at the intersection of these main avenues.

In 909/297 AH, the Abbasid caliph al-Muqtadir rebuilt Harput Kapısı and Mardin Kapısı following their intentional demolition by his predecessor ten years earlier. Harput Kapısı is a Byzantine design embellished during the rebuilding with crude animals carved in relief. The entrance, as are all gates, is heavily fortified between two half-round towers that project almost 15 meters from the line of the wall. Mardin Kapısı is similar in plan and decoration. Carved fauna became a tradition among subsequent rebuilders of Diyarbakır's towers and walls.

Seljuk sultan Malikshah built four towers on the western wall, commemorated in floriated Kufic inscriptions. One of these inscriptions, on a tower dated 1088/481 AH, has a figural carving in the center of the dedication featuring a seated man flanked by two bulls, while at each end of the writing a lion is carved above a ram and an eagle with outstretched wings. Another similar tower, built in 1089, has carvings of a seated man with galloping horses at his sides above the inscription, and lions with knotted tails at each end of the first line. These are followed by hares facing each other and an eagle above a seated female nude.

In 1183/579 AH Diyarbakır became the capital city of the Turkish Artukid dynasty, who made the most significant additions to the walls. That year the Urfa Gate was rebuilt by Muhammad, son of Kara Arslan. The gate has finely carved figures of dragons on either side of an inscription, and on the keystone of the arched gate is a bull's head surmounted by an eagle with outstretched wings. In the same area of the western wall, south of the gate, are the two most imposing towers, Ulu Beden Burcu and Yedi Kardeş Burcu. Both were commissioned in 1208-9/605 AH by the Artukid ruler al-Malik al-Salih Mahmud (who designed Yedi Kardeş Burcu himself). Ulu Beden Burcu was built by the architect Ibrahim bin Ja’far; Yedi Kardeş was constructed by the architect Yahya bin Ibrahim Sufi. The Ulu Beden tower is almost a full circle in plan, as it defends a sharply acute angle in the walls. It is 25.5 meters in diameter, faced with smooth basalt, and encircled midway up its height by a monumental inscription. The bulk of the inscription is one line of Kufic script, but in the center there are three lines forming a rectangular focal point. Winged, human-headed lions decorate the top two corners of the plaque; the bottom corners are each decorated with bulls. In the center above the inscription is the Artukid double-headed eagle. The Yedi Kardeş tower is similar in all respects to the Ulu Beden tower, but it is slightly larger, 27.8 meters in diameter.

The citadel is located in the northeastern corner of the city. It is fortified in the east and north by the city wall, and separated from the rest of the city by an additional wall on the west. The western wall of the citadel was constructed in the sixteenth century by the Ottomans, replacing an older thirteenth century wall. One enters through a large, undecorated gate called Saray Kapısı. Only part of the older western wall remains today, including several towers and the wide archway of what was once the main gate. This gate (called the "inner gate" here) is famous for its carved stone frieze that once framed the archway and included mirror images of lions attacking bulls on either side.

In the early thirteenth century, during the Artukid period, the fortifications enclosed administrative buildings; the area still functions much the same today. Just outside the remains of the thirteenth century walls is the Kale Mosque (Hazreti Suleyman Camii), built in 1160. Its position compromises the security of the walls (built later). Also within the citadel is the Artukid palace that was used as a prison by the Ottomans.

Images of the walls and citadel on Archnet begin with general distant views, then begin at Harput Kapısı on the north side of the city and move counterclockwise around the perimeter of the city walls, ending with sections of wall on the northeastern stretch. Following this are several images of the gates and structures within the citadel.