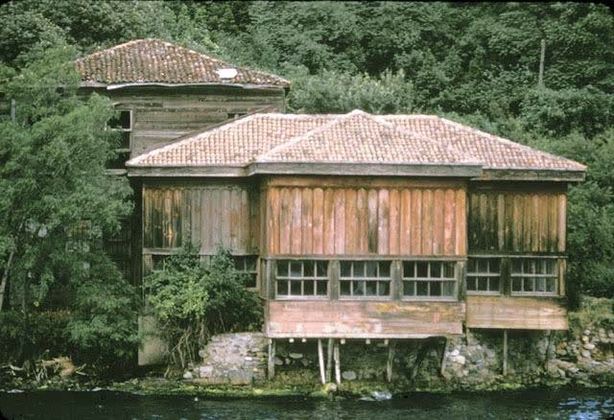 Share
The Amcazade Hüseyin Pasa seaside mansion (yali) is the oldest existing private residence in Istanbul. It was built in 1699 for Amcazade Hüseyin Pasa (1644-1702), a member of the Köprülü dynasty of grand-viziers in the second half of the 17th century, who was grand-vizier under Mustafa II from 1697 until his death. The residential complex he built on the Anatolian coast of the Bosphorus at Anadoluhisari consisted of three seaside mansions surrounded by gardens and orchards that extended landward. Only the assembly room (divanhane) of the men's quarters (selamlik) has survived, and is in urgent need of repair today after partial restorations performed in 1956 and 1977.

The wooden assembly room raised only two meters above the water's surface sits on and projects beyond a stone retaining wall abutting the water. Its plan consists of a domed square central hall (sofa), with three iwans projecting over the waters to the west and south, and into the garden to the north. Supported on consoles like bay windows, the iwans provide extensive views of the surroundings through strip ribbon windows placed low at the eye level of a person seated at the window-side sofas. Each window had windowpanes for shading and seasonal protection that, when raised, reflected rays of the sun from the water's surface onto the interior walls.

The interior of the assembly room is spacious and ornate compared to the modest exterior, which is painted in ochre. The walls are covered with wooden panels above the window level that depict floral arrangements composed of roses, carnations, jasmines, tulips and pomegranate branches in vases. A small pool, with a kiosk-shaped marble fountain, is placed at the center of the hall below the dome, which is decorated with elaborate arabesques. The doors and shelving in the assembly room are adorned with ivory.

This stately room was once connected to auxiliary rooms and service buildings to the east, where a two-story structure was built in the nineteenth century that still stands today. The women's quarters (haremlik) were housed in a large two-story mansion located at the water's edge seventy or eighty meters south of the men's quarters; it was destroyed at the end of the nineteenth century. The complex also had housing for servants, kitchens and a private hamam, none of which have survived.

Website of the Foundation for the Preservation of Turkish Monuments and Environment. http://www.tacvakfi.org.tr/. [Accessed February 14, 2007]