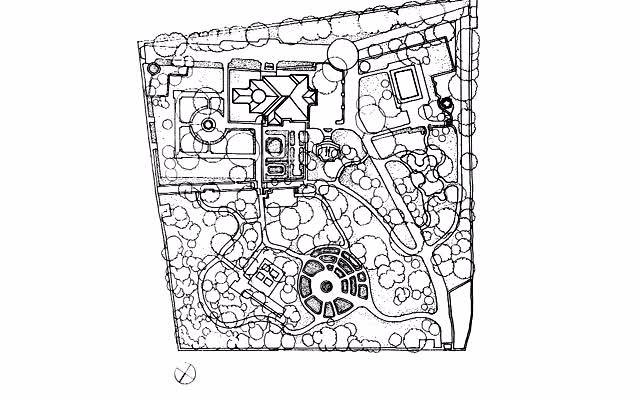 Share
The Aynalikavak Kiosk is the only remaining structure from the Tersane (shipyard) or Aynalikavak palace which occupied the coastline and woody hills between Kasimpasa and Hasköy between the fifteenth and the nineteenth centuries. The palace was named after the imperial shipyards that were spread out along the northern coast of the Golden Horn (Haliç), scattered between imperial and ministerial palaces and pleasure gardens. The remaining kiosk is a two-story residence situated in a terraced garden protected by high walls, behind the Taskizak Shipyard of the Turkish Naval Forces. Its longitudinal axis, oriented northwest-southeast, lies perpendicular to the coastline, although it has been left further inland today than when it was first built.

The Imperial Shipyard and Tersane Palace

The construction of the imperial shipyards on the northern coast of the Golden Horn began at Kasimpasa during the rule of Mehmed II (1451-1481) following the conquest of Constantinople. A coastal garden surrounded by forests, thought to be inherited from Byzantine rulers, was organized as an imperial retreat to the west of the shipyards known as Tersane Bahçesi (shipyard garden) or Hasbahçe (royal garden). While little is known of structures that may have been erected in this garden prior to the seventeenth century, it is certain that Ahmed I (1603-1617) erected a kiosk with a flower garden and built private quarters for his harem, including service buildings. Expanded by his son Ibrahim I (1639-1648), the palace burnt in 1677 and was rebuilt by his grandson Mehmed IV (1648-1687). By the eighteenth century, this palace thrived at this location comprised of the sultan's quarters (daire-i hümayun), private quarters (harem), quarters of the chief eunuch (kizlaragasi dairesi), treasury room (hazine dairesi), quarters of the treasurer (hazinedarbasi dairesi), prayer hall (namazgah köskü), quarters of the palace school instructors (enderun agalari dairesi), quarters of the weapons bearer (silahdar aga dairesi), a prayer hall (namazgah köskü), barracks of the palace troops (acemioglani koguslari) and rooms for servants. There were many garden kiosks, baths, pools and mosques and an aquarium (balikhane), all guarded by a seawall with the exception of the Hasoda kiosk that projected out on a terrace guarded by metal grilles; this is where the sultan and his companions sat during naval ceremonies.

The buildings of the Tersane Palace are featured in "Surname-i Vehbi", a poem by court poet Vehbi that narrates the fifteen-day royal circumcision ceremony held for the sons of Ahmed III at the Tersane palace. Illustrated with 137 miniatures by court painter Levni, the book includes the first known reference to the name Aynalikavak or Mirrored Poplar, which thought to have been coined to the palace after the installation of 'mirrors as tall as poplars' that arrived as gifts from the Venetians following the 1718 Treaty of Passarowitz. Renovations were ordered by Ahmed III (1703-1730) and Abdülhamid I (1774-1789). The palace was used primarily for the administration of foreign affairs by the late eighteenth century: the 1779 Aynalikavak and 1792 Yas Accords were signed with Russia at this location. Selim III (1789-1807) was the last sultan to spend time at this location. Although he tore down large sections of the palace to make room for the expansion and modernization of the imperial shipyards, Selim III-a renowned composer of Ottoman classical music-is said to have passed many days composing at the Aynalikavak kiosk. It is not certain whether Selim III rebuilt or renovated the kiosk built originally by Ahmed III; any clues pointing to its origin have been erased during its complete redecoration by court architect Garabet Balyan during the rule of Abdülhamid II (1876-1909).

The kiosk is built into a terraced hill, with one story on the landward side and two stories on the seaward side. The upper story, or the main floor, was reserved for the royal family and the lower story, a walk-out basement, was used partially for services. The plan of the kiosk is organized around two main halls placed on the longitudinal axis facing the sea and the hill in opposite directions, separated only by a wall. The Reception Hall (Arz Odasi), located to the northeast, is covered with a tall ribbed dome that is visible only from the exterior, and opens onto a sheltered terrace with a pool that faces the hillside. It is square with chamfered corners, with two wings or iwans looking out to the side gardens and a third elevated iwan facing the terrace door; the latter shares an oval window with the seaward hall. Each iwan is furnished with a large ornate sofa, whose carved baroque details match the lavish gilt decoration of the interior. Lit through large windows topped with upper windows, the hall is transversed by a wavy cornice that is formed by window and door arches, which bears a praise of the kiosk composed by court poet Enderunlu Fazil Efendi (d. 1810) and inscribed in talik script by calligrapher Yesarizade Mustafa Izzet Efendi (d. 1849). A door to the left of the elevated iwan leads into a private room with closets and bathroom. This room is called the Composition Room (Beste Odasi) after Selim III and is decorated with a simpler cornice that displays praises to the sultan composed by sufi poet Seyh Galip (1757-1799). Its furnishings consist of a continuous sofa that borders the walls and baywindow in Ottoman style, while its decoration is decidedly baroque. A door to the left of the elevated iwan leads from the Reception Hall into the small vestibule of the side entrance, which opens into the inner hall.

The inner hall, located to the southeast, is long and rectangular with a baywindow on its seaward facing side. Its side expands to form shallow brackets towards the middle, breaking the monotony of the long space and providing corners for the placement of doors leading to the five rooms and one bathroom that flank the hall. The room closer to the baywindow on the right opens into an enclosed staircase that leads down to the basement. Similar to the Reception Hall, this hall is furnished in the Western manner with sofas, armchairs, a table and chairs.

In its plan, furnishings and decorations, the kiosk displays a mixture of Western and Ottoman tastes and lifestyles, perhaps best exemplified by a writing table and two chairs found in a corner room that are embedded with mother of pearl and ivory in Ottoman style. There is some separation of rooms based on functions, while others have been kept multi-functional. The use of an upper plaster window (tepe penceresi) to crown a lower window reflects Ottoman vernacular tradition, while the size and shape of the windows are modeled after Western mansions. The interiors are decorated with wallpaper, floral and paysage paintings and low-relief baroque motifs, as well as imperial signatures (tugra), oriental carpets and calligraphy. Each room has a brazier for heating and unique chandeliers for lighting. The delicate use of gilt on walls, ceilings and furniture unify the interior that is distinguished with a different color schemes in every room.

The kiosk is a palace-museum and houses the Turkish Music Research Center and the Museum of Instruments in its basement. Due to restorations, the kiosk has been closed to visitors since late 1990s and is expected to remain closed in the near future.