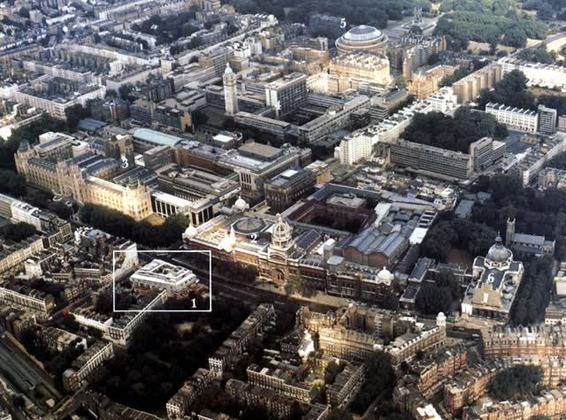 The Ismaili Centre in London is a religious, social, and cultural meeting palce for the Ismaili community in the United Kingdom. The Centre is the first religious and cultural centre to be specially designed and built for the Ismaili community in the West. Located in South Kensington, the Centre occupies a prominent site on Cromwell Road, facing the Victoria and Albert Museum on one of he major thoroughfares leading out of London.

The religious function of the Centre is of primary importance and the Prayer Hall is building's focal point. In addition, the building also contains a smaller prayer hall, classsrooms for religious instruction, offices, and a multi-purpose social hall.

The architects, the Casson Conder Partnership, were presented with an unusual design brief. They were requested to design an institutional building in an area of London which had a very great architectural diversity but which clearly had Western inspiration. The Centre sought to be compatible with its surroundings, but at the same time to meet the specific requirements of the Ismaili community and reflect the mood of Islamic architectural tradition.

The design of the building had to be such that it could deal with relatively large numbers of people entering and leaving the building, without causing major disturbance. The Ismaili Centre is opposite the Museum of Natural History and
the Victoria and Albert Museum. The area presents a variety of imposing and elaborately modelled facades, very different from each other in terracotta, brick and stone. One of the few elements which these buildings, built in different materials at different times, has in common is the light colour of their facades. The Ismaili Centre’s exterior has used materials and colours which are compatible with those of the surrounding buildings while at the same time in keeping with the traditional Islamic idiom and its colours of whites, light greys and blues.