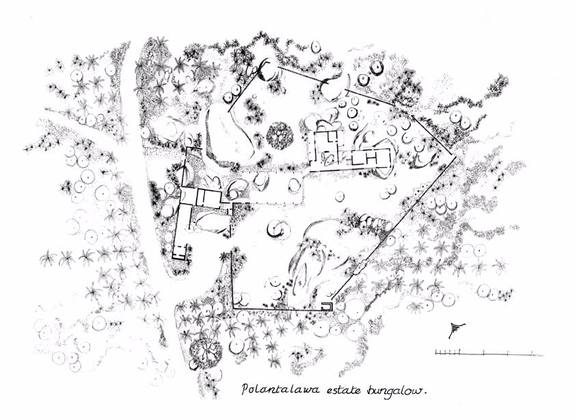 In 1963 the Swiss company Baur & Co commissioned a new manager's bungalow for a remote coconut estate near Nikarawetiya in the Dry Zone about 100 kilometres north of Colombo. Baur's Swiss director, Thilo Hoffman, wanted a prefabricated house similar to that built for the Ideal Home Exhibition in 1959. He provided a survey plan of the estate that identified a flat site next to the main estate road and the architects sketched out a first proposal based on the house they had built for Shell at Anuradhapura in 1960.When Plesner made an initial visit to Polontalawa, however, he made the radical suggestion of shifting the house into an area of large boulders. Hoffman then accompanied Plesner and Bawa on a working visit, when it was proposed that the house be built in the form of a cluster of pavilions inserted amongst the boulders. He seems to have warmed to the idea immediately and all thoughts of a low-cost prefabricated bungalow evaporated. The house was sketched out roughly on a piece of paper and then set out on the ground with sticks and string.

We discovered a spot full of boulders and we all said how excellent and splendid it would be to build a house there. So we got sticks and string, brought some chairs and sandwiches, and set the house out with the contractor, who followed every gesture of our hands.

Ulrik Plesner remembered: 'Geoffrey stood in the middle, telling the jungle villagers what to do and keeping them giggling - he was always the star on site while I was the grey eminence' (letter to the author).

The house was built without drawings by the local estate staff, acting mainly under Plesner's supervision. The compound is defined by a high encircling wall of rubble entered through a lychgate. A small entrance court leads between two boulders into the main living area, an open pavilion defined by a roof spanning from one vast boulder to another. A grand piano was placed beside one of the boulders, perhaps to emphasize the civilizing effects of the house on this remote and inaccessible site. Beyond the living area are two rubble-walled pavilions, one for the manager and one for his guests. A third pavilion, set behind the living room and next to a service entrance, contains the kitchens and estate office and is signified by a rubble water tower. A system of detachable rattan screens could be hung on the appropriate side of the living area during the monsoons.

Employing materials from the site and its immediate surroundings, this is a house that grows out of the landscape. It belongs to a long Sri Lankan tradition of cave temples insinuated between boulders and tucked under cliffs, and indeed such a temple exists at Kadiyagawa, just a mile to the north-west of the site. Here for the first time Bawa and Plesner exploited and celebrated a natural landscape to the full and succeeded in expressing the roof as a totally autonomous element.