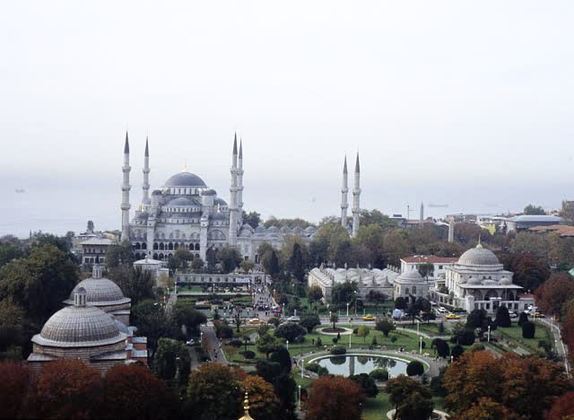 Sultanahmet Külliyesi is a multi-function complex in Istanbul that Ottoman sultan Ahmed I (r. 1603-1617/1012-1026 AH) commissioned during his brief reign. Work on the complex began in August 1609/1018 AH and finished in 1617/1026 AH just before the sultan's death. Work on the other buildings in the complex continued for three years under his sons Mustafa I (1617-1618/1026-1027 AH) and Osman II (1618-1622/1027-1031 AH), who also built a mausoleum for their father. The complex is composed of a mosque, royal pavilion (hünkar kasrı), mausoleum (türbe), madrasa (medrese), school for koran readers (dar'ül kurra), Koranic school for boys (mekteb), hospice (tabhane), hospital (darüssifa), soup kitchen (imaret), an open air market street (arasta), rental rooms (kira odalari) and mansions (konak), cisterns (mahzen) and public fountains (sebil).

The complex is sited in the heart of the old city of Istanbul, close to the Hagia Sophia. The southern part of the ancient Hippodrome or Atmaydanı (today's Sultanahmet Square) was cleared of residential palaces belonging to members of the aristocracy and a large portion of the Byzantine sphendone (the semi-circular end of the hippodrome) was taken down to make space for the mosque. For a variety of reasons including the terrain of the site, master architect Sedefkar Mehmet Aga organized the complex's buildings in functional groups in the vicinity of the mosque rather than arrange them symmetrically around the mosque as was done in its precedents at Fatih and Süleymaniye.  The complex buildings conform to the orientation of the mosque, 39 degrees east of south.

The walled mosque precinct, enclosing the mosque and the royal pavilion, occupies the peak of a hill alongside the Atmeydani to the northwest. Terraces descend down to the Bosphorus on the southeast side of the precinct wall. In 1912, a fire leveled the Ishakpasa (today's Küçükayasofya) neighborhood down the hill from the mosque, allowing archaeologists to reveal the remains of the Great Palace of Emperors (Büyük Saray) that was inhabited between the 4th and the 12th centuries CE. The mosque and market streets that run along its precinct wall to the southeast were built over the undercrofts of this palace. Further excavations in the market street and vicinity in 1935-1938, 1951-1954 and from 1983 to our day have unearthed 6th century palace floor mosaics that are on display at the Great Palace Mosaic Museum that occupies part of the rebuilt market street. Nothing remains of the rental rooms that were located above the stores here and others that were distributed among the buildings of the complex. The hammam of the market street, located at its southwest end, remains in disrepair.

On the north corner of the precinct, the madrasa (school for Koran readers) and the mausoleum form an enclosed cluster. These buildings were built on the cisterns of the 4th century Byzantine Sphendone, which was already in disuse by the early 13th century. The soup kitchen, hospital, and hospice form a second cluster that was built on top of the sphendone after the Hippodrome was filled with earth from the mosque's excavation. Only sections of the soup kitchen remain at this location today where an industrial school complex (mekteb-i sanayi) was built in the 19th century.

To the southeast: market street, baths and rental rooms

The qibla wall of the Sultan Ahmed I mosque doubles as a retaining wall to the southeast where there is a partial basement (mahzen) under the walled qibla garden; it is first in a series of terraces that were built downhill from the mosque. From here, two gated passages lead down to the level of rental housing that sits above market stores, culminating at portals on the market street and Tavukhane Street. An intermediate layer contains seven more rental rooms and a public fountain.
The arasta or market street of Sultan Ahmet was to provide income for the mosque and its dependencies. It is the only example of its kind to have remained from the 17th century. It is composed of two facing rows of stores running northeast and southwest, with over thirty stores in each row. There is a portal at the northeast end through which a passage leads up to the qibla garden of the mosque, and a single row of nine stores beyond it that used to be double-story rental rooms. An additional five stores are located around the corner at the southwest end on Tavukhane Street, where the market baths (arasta hamamı) are located. There are two adjacent portals here, one of which may have belonged to a rental mansion; the other marks the location of the vaulted passage that leads up to the qibla garden.
Since the market street was destroyed by fire in 1912, the area had been haphazardly rebuilt on multiple occasions up until the 1980s at which point the General Directorate of Foundations (Vakiflar Genel Müdürlügü) carried out a historical reconstruction of the stores. Traces of the domed rental rooms above stores were judged inadequate guides to a reconstruction, but were maintained as archaeological evidence. The Mosaic Museum, established in 1953 and re-opened as the Great Palace Mosaic Museum in 1997, occupies 16 rooms of the market street.
The baths were also damaged in the fire of 1912, at which time the changing room collapsed. It was spared from destruction during the Great Palace Excavation and remains in ruinous condition. It has a changing room leading into an L-shaped warm room (iliklik) that wraps around the hot room, and a furnace (külhan) that supplied the hot water. The hot room can be entered from either wing of the warm room and consists of a hexagonal bathing area at the center surrounded by private bathing cells (halvet) that square off the room. It has lost its dome and marble fixtures.
To the North: the mausoleum, madrasa and school for Koran readers

The madrasa, mausoleum and a funerary garden are accessed from a private lane that is entered from the mosque precinct. They are isolated from the outside by walls that closely follow the outline of the two buildings. The mausoleum, located on the north side of the lane, is a large square building set in a garden and entered from a three-bay domed portico to the northeast. Under its tall domed space is placed the sarcophagi of Ahmed I, his wife and Queen Mother Kösem Sultan (d. 1651), their sons Osman II, prince Bayezid, Murad IV (1622-1640), Ibrahim I (1640-1648) and many of their sons and daughters. This hall is extended with an iwan opposite the entry. The interior is decorated with Kütahya tiles, penwork (kalemisi) and painting on plasterwork (malakari) that was restored in the 19th century. The exterior is paneled with marble.
The small domed building behind the mausoleum is a dar'ül kurra, or a school for training Koran readers. It is built close to the mausoleum iwan into which it opens with a large window. A room for the timekeeper of the mosque (muvakkithane) was added to the front of the mausoleum in the 18th or 19th century, replacing a sebil. There is a walled-in cemetery (hazire) between the dar'ül kurra and the mosque precinct. There were six adjoining stores on the Hippodrome side of the cemetery, which appear as two-story wooden buildings with domes in 19th century photographs.
The madrasa stands on the opposite side of the lane from the mausoleum and the walled-in cemetery. It is composed of twenty-four rooms around a rectangular arcaded courtyard with a fountain at the center. The main entrance, in axis with the fountain, is located at the center of the northwestern wing. Traces of columns around the fountain suggest that it may have been roofed. The madrasa rooms have windows opening to the courtyard and the exterior and are equipped with fireplaces (ocak) and shelving niches. The main classroom (dersane) is atypically annexed at the northern corner of the cloister rather than on its longitudinal axis. Madrasa functions were discontinued with the education reform law (Tevhid-i Tedrisat Kanunu) in 1924. The building was restored in 1935 and the courtyard was covered with a glass roof to prepare for its new use as an archive for the Directorate of Public Affairs.
On the Sphendone: the soup kitchen, hospital, and hospice

The hospice (tabhane), soup kitchen (imaret), hospital (darüssifa) were erected one behind the other over the sphendone (the semi-circular end of the hippodrome) to the southwest of the mosque. At this end, the hippodrome is a terrace supported by a deep circular wall of vaults and arches that retain the hill towards the Marmara Sea. The retaining wall has maintained its function and is still visible today.
The charity cluster of Sultan Ahmed I, however, was already in ruins by the time the School of Industry (Mekteb-i Sanayi) was erected at this location in 1866. Sections of the hospital, the soup kitchen and possibly a former Sword Factory (kiliçhane) that had existed here in some form since Byzantine times, were incorporated into the campus. The buildings that occupy the site today are from 1894 and were built by Architect Raimondo D'Aronco after the original school collapsed in an earthquake. Along with the School of Industry, three separate buildings originally housed the Janissary Museum (Yeniçeri Müzesi), the Ministry of Agriculture, Mining and Forestry (Ziraat, Maadin ve Orman Nezareti) and the School of Industry. The remains of the hospital and soup kitchen were restored and incorporated into the new development. Restored in 1977, the buildings are in use by the Registrar of Marmara University (Marmara Üniversitesi Rektörlügü) and the Sultanahmet School of Industrial Arts (Sultanahmet Endüstri Meslek Lisesi).
The hospital of the Sultanahmet Complex is often identified as an insane asylum (timarhane) and was probably dedicated to that purpose. Located at the western end of its cluster closest to the circular retaining wall, the hospital consisted of rooms around an arcaded courtyard and adjoining baths (darüssifa hamamı). Its rooms and portico had collapsed prior to the construction of the School of Industry but its external walls and main portal, which faced northeast, have been preserved. Certain columns and capitals belonging to its portico have been used at the entrance of the school building.
There are three separate structures of the soup kitchen that are identifiable upon entering the School of Industrial Arts from Sokollu Mehmet Pasa Highway. The kitchens (matbah or mutfak) have been preserved entirely whereas the bakery (firin) and the cellar (kiler) have been modified. The kitchens were entered from northeast and southwest and had a vaulted storage room and a chimney. Their twin domes had ventilation slits along the drum and oculi with glass lantern for further aeration. The bakery, which opens to the southwest towards the kitchen, is a square building with four domes. Its ovens have been enclosed and only one of its chimneys remains. The cellar is the largest structure in the soup kitchen and is located to the west towards the hospital. There is no trace of the dining hall (mekel or yemekhane).
The madrasa and other buildings

The madrasa, a single room raised on a vaulted basement, is attached to the northeast wall of the outer courtyard next to a gate. It has a fireplace, shelving niches and a small toilet. It has a flat roof but may have been covered with a dome prior to rebuilding after the 1912 fire. The northeast façade has some of the original stone paneling.
Sources: