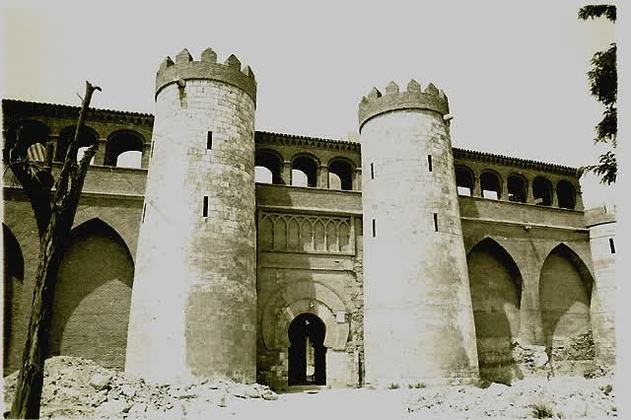 Share
The Aljafería Palace was constructed during the reign of the independent Hudid ruler of Saragossa, Ahmad I b. Sulayman , Sayf al-Dawla 'Imad al-Dawla al-Muqtadir (r. 1049-82).
The palace's plan is small, approximately 70 x 70 meters, and it was surrounded by a continuous wall punctuated by round towers, only three of which survive. Two of these towers flank the entrance, creating a highly fortified exterior in contrast to the luxurious ornament of the small courtyard, so-called throne hall, and octagonal oratory that remain from the eleventh century. These spaces are distinguished by architectural motifs and an ornamental programme that evoke caliphal Córdoba. However, the interlacing arches and carved stucco ornament of the Aljafería achieve a level of complexity and fantasy that pushed an established repertoire of forms into new realms. These diminutive, highly decorated spaces have been interpreted as settings intended to evoke paradise for majalis - gatherings of the ruler and a highly exclusive group of companions - at which wine drinking and poetic recitation took place.
The forces of the crown of Aragon conquered the city in 1118, and the city's Christian rulers, beginning with Ferdinand and Isabel in the 15th century, appropriated and added to the Aljafería palace. Ongoing archaeological excavations are aimed at clarifying the complex history of the site.
Sources: