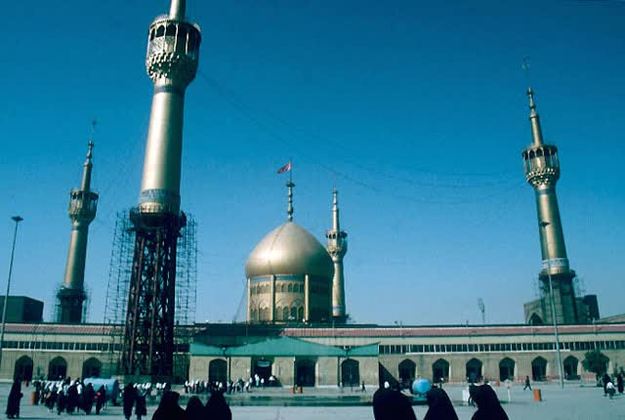 Share
The tomb of Ayatollah Khomeini is located to the south of Tehran near the cemetery of Bihisht-i Zahra (the Paradise of Zahra). Construction commenced in 1989 and, when completed, the tomb will be the centerpiece of a 5000 acre development. Included in the proposal is a university for Islamic studies, a seminary, and a shopping mall.
The exterior of the shrine complex is a highly recognizable landmark, with a gold dome on a high drum and four free-standing minarets, also golden, which are visible from a distance in the valley of Tehran. The complex itself covers a vast rectangular space designed to accommodate great numbers of pilgrims. It consists of a large, square roofed pavilion centered on a domed tomb chamber. Two u-shaped buildings adjoin this massive central pavilion, extending the complex outward on two sides. Outside this area are large landscaped parks.
Entrance to the complex is through a large parking lot, which includes smaller buildings and kiosks selling tapes, souvenirs, and food. Visitors are then guided through a security area between the parking lot and the large square pavilion. The pavilion is a hypostyle hall that supports a space-frame roof made of metal trusses. The architecture of the roof exposes the building's HVAC system. Windows allow light into the room, and lights at the intersection of the trusses illuminate the vast hall after dark.
The sarcophagus of the late Imam is centrally placed in the vast square pavilion. Above it is a domed vault covered in mirrorwork. The dome sits on a transition zone with two layers of clerestories decorated with stained glass tulips, the symbol of martyrdom. Eight massive marble columns circling the sarcophagus support the dome.  The sarcophagus itself is housed in a glass chamber with a metal grilled enclosure.
Sources: