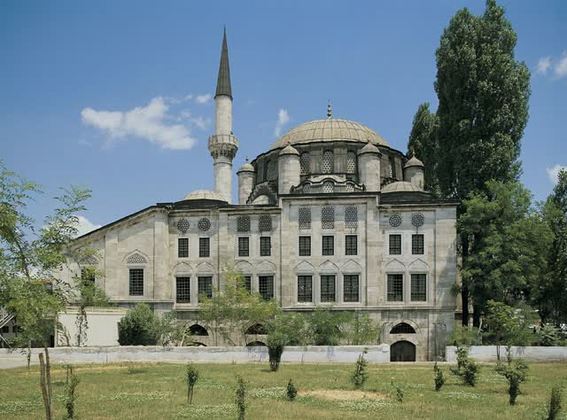 Share
Sokullu Mehmet Paşa Camii is a mosque in the Azapkapı neighborhood of Galata, Istanbul. It is named for Sokullu Mehmed, who served as grand vizier under three Ottoman sultans for a total of fourteen years. It is possible that his wife, Ismihan Sultan, may have played a role in commissioning the mosque, as she did with other buildings named after Sokullu Mehmed. The mosque was designed by Sinan and an inscription dates the building to 1577-1578/985 AH.It is also known as the "Azapkapı," after the name of the neighborhood, which is derived form a gate in the Galata City Walls, formerly called "Porta di Sant' Antonio".
Layout
The site is situated at the foot of the Unkapani Bridge along the shores of the Golden Horn. The mosque is elevated on a vaulted basement to compensate for the sloping terrain. It is oriented slightly east of southeast.
The mosque
The mosque consists of an almost square prayer hall preceded on its northwestern side by a portico with a second story. On the southeastern side, a qibla iwan projects outward forming an apse-like space. The mosque is accessed by two staircases located on the north and west of the northwestern elevation and they lead to the portico. Once an arcaded porch open to the outside, the arches have been filled in and the main entrance to the prayer hall replaced by two smaller entryways placed symmetrically on the sides of the previous entrance. Above this enclosed porch is a second story gallery with large windows on its three exterior-facing sides.
The prayer hall is covered with a central dome supported by eight arches that rest on eight polygonal piers forming an octagon, six of them free-standing and two of them engaged to the qibla wall. The transition to the dome is made with four larger semi-domes located on the vertical axis, with four smaller semi-domes placed on the diagonals and eight squinches.
On the exterior the dome appears to be raised on an octagonal drum pierced with a row of windows and supported by eight weight-towers situated on the corners. Four semi-domes cover the four corners of the mosque. An enclosed portico lit by a row of windows and roofed with a sloped lead roof is attached to the northwestern elevation of the prayer hall. A polygonal stone minaret with a muqarnas balcony and marble grille balustrade is detached from the mosque and connected to the portico through a bridge. A spiral stairway on the eastern corner of the portico leads to the stone bridge that offers access to the minaret. Scholars mention that the stairway's location could be the base of the former minaret, as the existing minaret retains an older foundation in its basement. The mosque is lit by two rows of rectangular windows crowned with slightly pointed arches and additional windows that pierce the supporting semi-domes.
Four niches with muqarnas semi-domes frame the main entrance to the prayer hall. Inside, the almost square prayer hall is flanked by two wings on its northwest and southwest. A continuous balcony, accessed by stairways placed on the north and west of the originally main entrance, runs along all three sides of the mosque, excepting the qibla wall. The mihrab niche, covered with a muqarnas semi-dome, is located in the middle of the qibla iwan (also roofed by a semi-dome). Both the mihrab niche and the minbar, located on the southern corner of the qibla iwan and the qibla wall, are formed of marble.
The mosque was damaged in 1807 by a fire, and in 1827, the partially-destroyed minaret was re-built in a bulbous style, while the restoration work for the rest of the mosque did not begin until 1938. In the interim, the mosque was abandoned for over thirty years, resulting in the loss of its decoration (the tiles, the marble door frames, and the curved wooden window panes). In 1941 colored plaster windows replaced the old windows, a replica of the original inscription plaque was placed in the location of the original, new Kütahya tiles were installed on the interior, and the fresco decorations of the domes were redone. In 1941, after the completion of the restoration work, the mosque opened to the public. Later, in 1955, the minaret was rebuilt in a classical style and the muqarnas balcony was added. Behind the southeastern elevation of the mosque, a series of shops (destroyed in 1985) indicated that the mosque was a part of a larger charitable endowment. The only other surviving part of this endowment is a hamam near Yesildirek. After the construction of the twentieth century bridge, the basement, built on wooden piles, suffers from exposure.
Sources:

Sözen, Metin, and Sami Güner. Sinan : architect of ages text by Metin Sözen ; phptographed by Sami Guner. n.p.: [Istanbul] : Prepared under the auspices of the Turkish Ministry of Culture and Tourism, 1988. 295-299. 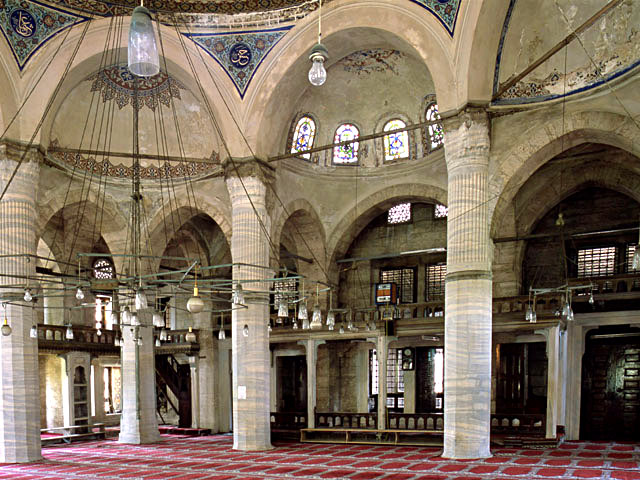