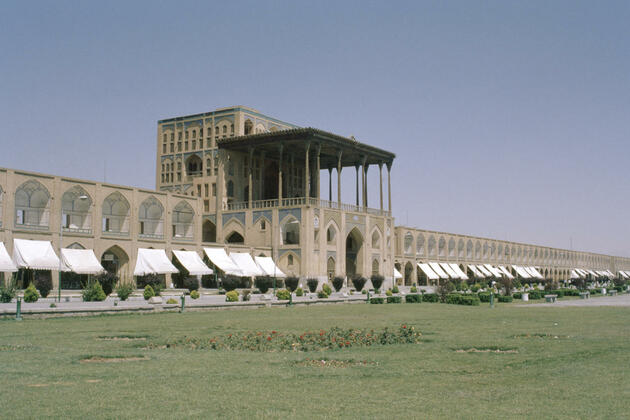 The Ali Qapu is located on the west side of Isfahan’s main square, the Maydan-i Shah, also known as Naqsh-i Jahan (“Half the World”) and now called Maydan-i Imam. It is situated directly across the square from the Mosque of Shaykh Lutfallah. The building is at heart a monumental gatehouse, originally conceived as a two-story atrium communicating between the public maydan and semi-private dawlat-khanah or royal precinct consisting of an assemblage of palaces, storehouses and government bureaus located to the west of the square. However, it grew to accommodate other courtly functions, including administration and entertainment.

The building was constructed in several phases.1 The original building consisted of a two-story atrium built flush with the western wall of the square. The date of this initial building is probably 1590-1595/1000-1004 AH and corresponds with the first construction of the maydan itself under Safavid Shah ‘Abbas I.2 The first addition was a second tier that doubled the height of the building and included two more floors. It likely corresponds to a large renovation of the square that took place from 1602-1604/1011-1012 AH.3 A fifth and final floor was then added to the tower at some point before 1614/.4 The last major addition to the building occurred some decades later during the reign of Shah ‘Abbas II, possibly in 1643/1053 AH according to a textual source that mentions a “talar,” or columned porch, being constructed in this year.5

Thus, in its final form, the building consisted of a five-story tower fronted by a two-story gatehouse supporting a large columned porch (talar), affording views over the square. The five-story tower rises substantially higher than the two-story galleries of the maydan's surrounding wall that flank it, and is thus visible from afar.

Today, the building is entered through the later two story gatehouse, rectangular in plan. The ground floor is dominated by a central vaulted iwan-formed corridor that rises two stories in height. This central iwan-corridor is bisected toward the back of the building by another corridor running perpendicular to it. Two rectangular rooms that also open onto the maydan flank this central vaulted corridor toward the front of the building. These side rooms are surmounted by second-story galleries that offer vistas onto the maydan through arched openings.

At the end of the vaulted entrance corridor, one comes to the eastern wall of the five-story tower, flush with the west side of the maydan, which originally served as the building's facade. The floors of the five-story tower served different functions, which are reflected in the varying floor plans. The ground story, which housed government bureaus is based on a central rectangular domed chamber with iwans on the south and north sides. Doorways on the north and south iwans give onto smaller side chambers. On the third floor, a large rectangular audience hall with vaulted ceilings gives onto the talar porch on the east and affords views of the royal precinct to the west. Flanking this room are smaller side chambers. The crowning element of the assemblage is the so-called "music room" of the fifth floor: a high, airy, cross-shaped space giving onto smaller side chambers. This cross-shaped central space is most famous for its ceiling, which is decorated with muqarnas niches carved with vessel and instrument-shaped perforations and crowned with a lantern vault bathing the hall with light.

The third-story audience hall opens onto the tall talar porch surmounting the two-story gatehouse. The porch is supported by eighteen wooden columns and boasts an ornate ceiling in addition to a central fountain, to which an elaborate plumbing system brought water from ground level up to the third story of the building.

Along with the Chihil Sutun and Hasht Behesht, the Ali Qapu was restored by IsMEO - Istituto Italiano per il Medio ed Estremo Oriente for NOCHMI - National Organization for Conservation of Historic Monuments of Iran. The project, completed in 1977, received an Aga Khan Award for Architecture in 1980. 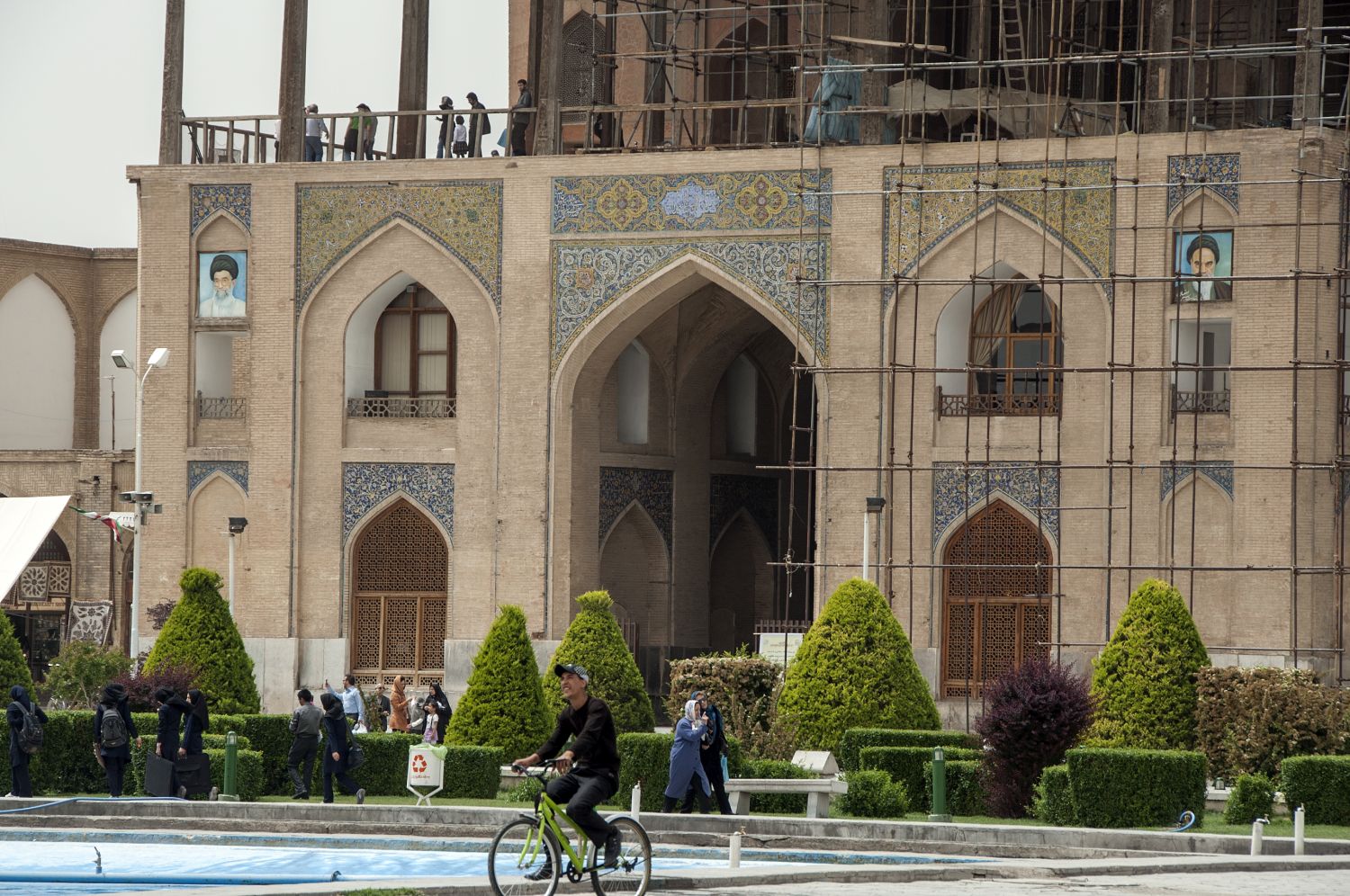