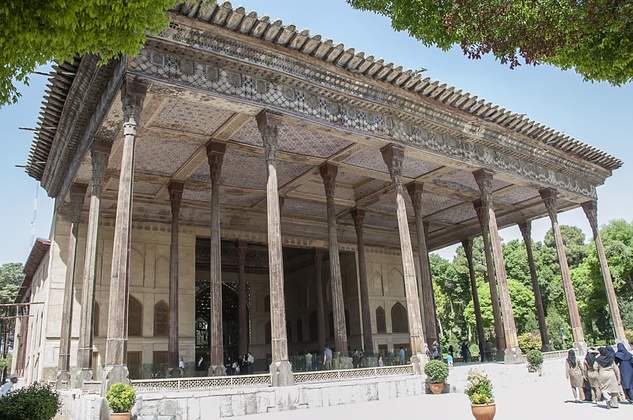 Share
Located on axis to the west of the Maydan within what was once the palace gardens, the Chihil Sutun is one of the two remaining pavilions built as part of the palace complex or dawlat-khana. The second is the Hasht Behesht. Originally constructed in 1647, the pavilion was largely rebuilt in 1706, at which time its most prominent architectural feature, a talar porch with 20 wooden columns, was added.
The palace consists of a rectangular masonry building with a large wooden talar porch attached to its east side. The masonry building's plan is symmetrical and centered on a large rectangular audience hall divided into three domed bays separated by arched vaults. This central hall is entered on its long sides (the east and west) through recessed iwans, while its short sides give onto verandas (north and south). Four smaller corner rooms flank the east and west iwans and are accessible through them. While this audience hall can be entered from all four sides, its main entrance is through the east iwan, which communicates with the talar porch through an elaborately mirrored niche.
The primary form of architectural decoration in the palace are wall paintings. In addition to the painted vegetal and geometric ornaments that decorate arches, ceilings and other framing elements, large figural scenes fill panels in both the interior spaces and the two verandas on the north and south sides of the masonry building. In the central hall, figural scenes occupy the large arched spaces beneath each bay on the east and west walls, giving six main scenes. A battle scene between Safavid Shah Isma'il I and the Uzbeks occupies the space under the southernmost bay of the east wall. Directly across from this, the west elevation of the southern bay is adorned with a reception scene where Safavid Shah Tahmasp welcomes Mughal Emperor Humayun. Moving to the central bay, battle scenes again adorn the east and west walls: a battle between Nadir Shah and the Mughals is featured on the western wall and a battle between Shah Ismai'l I and the Ottomans is featured on the east. On the walls of the north bay, reception scenes fill the spaces: on the west wall, Shah Abbas I receives the Uzbek ruler Vali Muhammad Khan and on the east, Shah Abbas II receives another ruler, either Indian or Uzbek, whose identity is debated. Smaller figural compositions featuring feasting and hunting scenes enliven the dado zones of the walls below.
In the smaller and more private corner rooms, the wall paintings depict both feasting and literary themes. In the southeast corner room, the images are taken from literary classics, including an image of a bride preparing to immolate herself. In the northeast corner room, paintings depict Shah Abbas I hosting a garden party.
The north and south verandas include panel paintings featuring various personas, including men and women in European dress. Unlike the scenes that adorn the interior walls, these paintings suggest type studies rather than depictions of specific literary characters or historical persons. The style of the veranda paintings also differs from that of the interior paintings. While the paintings on the interior are rendered in a style associated with the miniature painting traditions of Iran and India, the veranda paintings are executed in a "Europeanizing" style defined by the use of shading and perspective as painterly techniques.
Along with the Ali Qapu and Hasht Behesht, the Chihil Sutun was restored by IsMEO - Istituto Italiano per il Medio ed Estremo Oriente for NOCHMI - National Organization for Conservation of Historic Monuments of Iran. The project, completed in 1977, received an Aga Khan Award for Architecture in 1980.
Sources:
Babaie, Sussan. "Shah 'Abbas II, The Conquest of Qandahar, The Chihil Sutun, and its Wall Paintings." Muqarnas 11 (1994): 125-142.
Blair, Sheila S. and Jonathan M. Bloom. 1994. The Art and Architecture of Islam. New Haven: Yale University Press, 192-193.
Hillenbrand, Robert. 1994. Islamic Architecture: Form, Function and Meaning. Edinburgh: Edinburgh University Press, 428-433.
Michell, George. 1978. Architecture of the Islamic World. London: Thames and Hudson, 73, 254.
Additional information:
http://iranshahrpedia.ir/view/13711
Record updates: 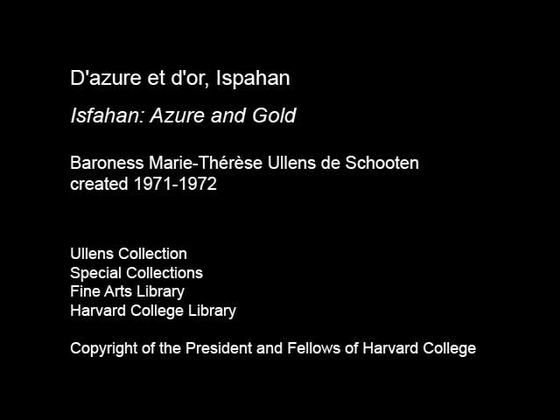 Locations in the video include (in order of appearance):