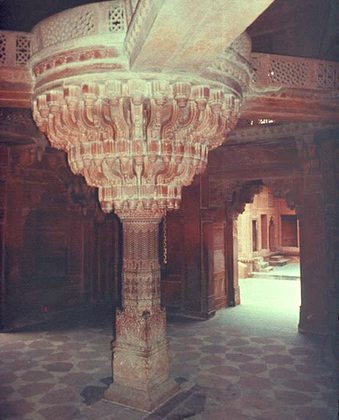 Share
The Diwan-i 'Am quadrangle flanks the eastern side of a zone measuring 82.90 meters from east to west by 170.40 meters from north to south, comprising the semi-public palatial buildings, including the spaces used for political administration. It can be divided in three main parts organized around three adjoining courtyards. The first part, on the north, is the courtyard entered when exiting from the west side of the Diwan-i 'Am. Around this courtyard are the building with a central column (better known as the (attributed) Diwan-i Khass), the (attributed) Treasury (Ank Mikauli), and the Astrologer’s Seat.

The free-standing structure situated in the center of this courtyard has come to be identified as the Diwan-i Khass. Other theories describe this structure as having been used for religious discussions (Ibadat Khana) or as a "Jewel House," where the Emperor would store and inspect his gemstones. The building’s plan is unique, and has attracted many interpretations based on its symbolism.

Built in red sandstone, it is a square, symmetrical building measuring 13.18 meters/side on the exterior. It stands on a paneled plinth, 0.75 meters high. From without it appears double-storied; its four elevations are identical. On the ground floor, each elevation is pierced along its central vertical axis by a doorway 2.21 meters wide. The doorways on the north and south sides are flanked with large deeply recessed windows filled with a perforated stone screen (jaali). On the east and west sides there is only one jaali, found to the right side of the entrance. Evidence of socket holes in the lintels and thresholds of the doorways indicate the former presence of stone doors.

A peripheral balcony with a jaali-filled stone balustrade, carried on heavy decorated corbels, runs at the height of the first floor above ground level. Along this floor, three exterior openings on each side are protected from above by a peripheral broad projecting eave (chhajja). Over the chhajja runs a frieze carved with geometrical patterns. The roof is crowned at each of its four corners with a chhatri, a columned pavilion with cupola roofs crowned by a sheath of lotus petals (mahapadma) supporting a characteristic kalash finial. Each chhatri is 1/3 of the total building height. The roof and the peripheral balcony are accessed by two staircases built into the building walls at the northwest and southeast corners.

Within, the building contains a single-story square hall measuring 8.74 meters/side. The predominant element of its interior is a massive ornamental column, square at its base and octagonal at the shaft, located in the center of the space. The column is surmounted by a circular capital composed of three-tiered richly carved radiating brackets, each one of which is composed of five separate pieces of stone. The top of the capital forms a circular platform from which bridges run diagonally to the corners of the room, joining a gallery, 0.75 meters wide, which runs along the interior walls at approximately first floor above ground level. At the four corners of the room, the gallery forms quadrangular spaces, supported by corbelling in the same manner as the central column. The circular platform, the bridges, and the interior peripheral gallery all have jaali-filled balustrades. In the northwest and southeast corners of the hall above the gallery are storage niches formerly closed by stone doors fastened by padlocks; their socket holes are still visible.

The hall has a curved roof divided into panels by flat projecting ribs. A stone pendant hangs in the middle of the central panel. One theory holds that Akbar’s throne was situated on the circular platform and the corners of the room at the gallery level were assigned to four of his ministers. The dimensions of the inner gallery, as well as those of the center and corner seats, tend to rule out the possibility that the building was used by the Emperor and his ministers for affairs of state or religion. However, a manuscript of Akbar’s memoirs, dated to 1604, depicts the Diwan-i Khass as a central domed pavilion with chhatris at each corner. The interpretation that the Emperor sat on the central platform as he inspected precious jewels is supported by the building’s location near the Ankh Michauli (Treasury), and the fact that three distinct treasuries (for copper, gold & silver, and gems & jewels) were located in the palace complex.