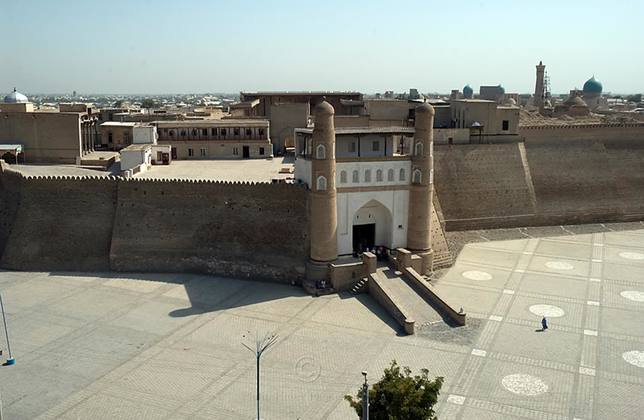 The Ark or Arg of Bukhara is the central citadel within the city's larger mud wall fortifications. It has served a multitude of royal functions over the last twelve centuries ranging from military barracks and palatial quarters to administrative offices. Currently situated as a citadel within the northern section of the old city, it was originally built as an independent fortress and had stood distinct from Bukhara's earliest shahristan, or city center. With its sloping mud walls, this Central Asian citadel is in dire need of repair. As a structure that was continuously used through the centuries, it demonstrates the transformations in military architecture and technology from early Arab rule until the modern Russian state.

The Ark has been shrouded in mythology from early times. Abu Bakr Muhammad Ja'far Narshaki's history of Bukhara from the tenth century attributes it to a legendary Iranian prince, Siyavush. Mansur Abu al-Qasim Firdawsi's Shahnama from the eleventh century declares as the Ark's founder, Shiri-Kishvar, a vassal of the Turkish Kagan Kara-Churin from the end of the sixth century. Sources from the Sassanids (226-652), through the Sogdians (ca. third to eighth century) confirm the fortress's existence. Kuteiba ibn Muslim, Arab vice regent of Khorasan in 705-715, had built the first mosque here and renamed the fortress, Kukhendiz. Ismail bin Akhmad, or Ismail I (892-907) who embellished Bukhara as capital of the Samanid dynasty capital made significant additions. Arslan Khan Mukhammad (1102-1129) commissioned new sections as part of the Qarakhanid Dynasty's ambitious construction campaign. Later, Makhmud Yalavach as Mongol governor of Bukhara undertook major repairs in 1220 after Genghis Khan's pillage of the city. Timurid ruler Ulugh Beg (1447-1449) and Shaybanid ruler Abdullah Khan II (1583-1598) were responsible for expanding citadel to enclose three hectares. Ashtrakhanid rulers Abdul Aziz Khan (1645-1680) and Ubaidullah Khan (1702-1711) radically rebuilt the Ark. It was modified in section with the Mangit Dynasty's reinforcement of its western walls with kiln-dried bricks in the early nineteenth century. The citadel has changed little after a devastating fire in 1920 that destroyed some later-period wooden buildings.

Five projecting, circular bastions protect the structures behind the Ark's tapering walls. Built in mud brick, these crenellated walls enclose buildings erected atop an earthen mound. This artificial hill is believed to be composed of layers of building rubble, whose gradual rise required piecemeal heightening of the fortification walls and their resulting eccentric profile. The Ark's internal layout is largely governed by the primary east-west street connecting Bab as-Sahl (Western Gate) and Bab al Djum (Eastern Gate). The latter, also known as Darvaza Guriyan or the Hay-seller's Gate, led out from the citadel to the Jami mosque, before being blocked in recent times. The remaining historic structures are clustered in the northwestern quarter of the citadel, near the primary western portal. This gateway is reached by a steep ramp that served as a naqqar khana (bandstand), and alternately as a ceremonial balcony overlooking Reghistan Square. From here, a swerving and narrow, covered dalon (passageway) climbs to the citadel's main terrace. Twelve ob khanas (prison cell niches) flank this flag stone paved passageway. The upper compound includes the court mosque, administrative offices, storage chambers, water tanks, treasury, Emir's chancellery, ceremonial reception hall and private chambers. These functions were organized hierarchically in rooms around arcaded courtyards. The visitor's social status and proximity to the Emir determined the individual circulation routes and access levels.

The interiors of the remaining structures reveal fragments of decoration including a variety of painted woodwork, stucco molding and elaborately carved marble bases. Some of the better preserved buildings, like the court mosque, retain traces of painted plaster and of gilt papier-mache. This seventeenth century mosque was built by Subhan Kuli Khan and consists of a single prayer hall enveloped by a colonnade on three sides. The Kurnish Khana (reception hall) built in 1605-06 features exquisitely carved wooden columns surmounting a marble throne and canopy. The harem, whose walls were once embellished with gilt molding and small polychrome floral motifs has been vandalized in the early twentieth century Bolshevik struggle for the Bukhara Emirate. Large parts of the Ark are empty today with ruins or mounds waiting excavation. Preservation efforts have concentrated on the more visible or public portions instead of formulating a comprehensive conservation strategy. The citadel's mud filled plinth is facing erosion on the northern and western sides where the fortification walls have crumbled. 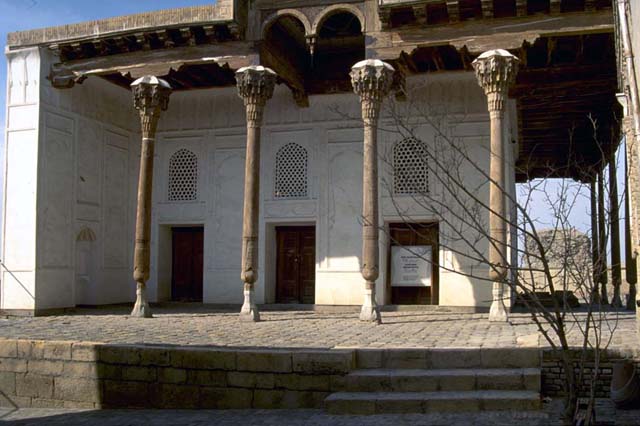