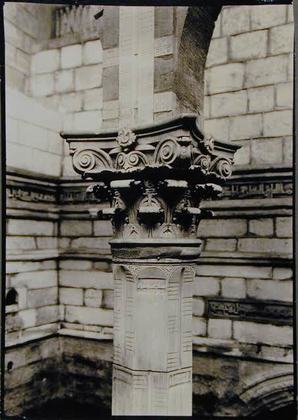 Share
The Nilometer was built during the reign of Caliph al-Mutawakkil in 861 under the direction of Ahmad ibn Muhammad al-Hasib. The system was devised to measure and predict the annual flood of the Nile by Abu'l 'Abbas Ahmad ibn Muhammad ibn Kathir al-Farghani, a native of Farghana, West Turkestan. He was known in the West as the astronomer Alfraganus, and his chief work, in which the system appeared, was translated into Latin and first printed at Ferrara in 1493.

This is the oldest Islamic structure in Egypt whose original form is preserved, and takes the form of an octagonal column within a stone-lined pit. The pit is connected to the Nile by three tunnels, and accessed by a staircase on the interior walls. The arches within the pit are the first occurrence of the "tiers-point" arch, used here three centuries before their appearance in Gothic architecture, and with the novel use of zigzag framing carved on its stone voussoirs.

It retains its original Kufic inscriptions, both Qur'anic and secular, commemorating al-Mutawakkil's work, though tampered with by Ibn Tulun, possibly to conceal the caliph's name. The inscriptions were executed in white marble on a blue background to produce a strong contrast.