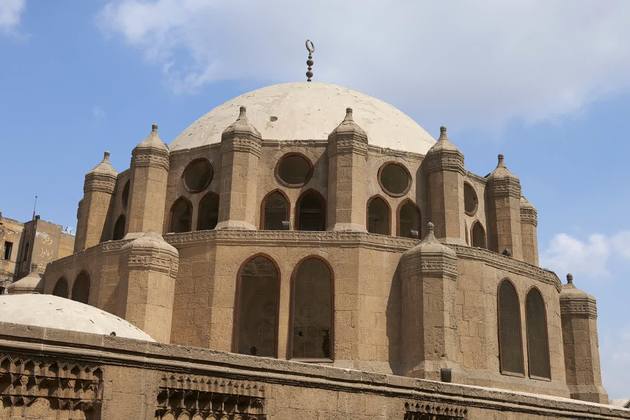 Share
The mosque was built in 1774 by Muhammad Bey Abu al-Dhahab, who, along with his master 'Ali Bey al-Kabir, attempted to restore the Mamluk dynasty in Egypt between 1771 and 1772. It boasts a prominent location between the Mamluk complex of al-Ghuri and the Fatimid Mosque of al-Azhar. The mosque, along with a two-storied takiyya on its south side, is all that remains of a major religious complex which also included a library, latrines, and fountains. Although this mosque was built after the ambitious Abu al-Dhahab had abandoned his master's intrigues and reverted to acknowledging the suzerainty of the Ottoman sultan, it displays bold Mamluk features assimilated into an Ottoman scheme. It resembles the Ottoman Mosque of Sinan Pasha in Bulaq (1571), whose spatial configuration and dome size and profile it imitates. Among Mamluk features are the dome's zone of transition, employing a tripartite squinch reminiscent of that of al-Qubba al-Fadawiyya, attributed to Qaytbay (1479); the incorporation of the founder's tomb into the mosque, a Mamluk legacy appearing here for the first time in a Cairene Ottoman building; the dedication of the mosque like that of Sultan Hasan as a madrasa for the four rites of Islamic law with the exclusion of the Sufi services commonly accommodated in late Mamluk mosques; the typical facade paneling with muqarnas recesses containing windows; and, above all, the square minaret which is almost a replica of that at the nearby complex of al-Ghuri. Unlike the Mosque of Sinan Pasha, whose porticos look out onto gardens on the port of Bulaq, this mosque is situated in the center of the city and is built on top of shops generating income for the upkeep of the mosque as was usually the practice in commercial locations. Remarkable is the partial screening of the porticos facing the streets with a wall which, along with the ziyada created by setting back the mosque and porticoes from this facade or screen as well as the raising of the mosque above street level, serves as a buffer zone providing the necessary accoustical insulation and eliminating visual distractions for the worshipers inside the mosque and the latecomers in the porticos.

The approach to the serene interior of the mosque from the crowded street has two stages. First, stairs rising directly from the sidewalk to the abstracted Mamluk trefoil portal, which is centered on the facade following Ottoman traditions in Istanbul, provide a vertical transition. Since this portal is shifted off the mosque's doorway by one portico bay, the horizontal transition from the top of the stairs to the interior of the mosque follows an L. This sequential experience recalls that of the bent entrances of elevated Mamluk mosques, where a dark passage extends between the inner gate of the entrance unit and the open courtyard surrounded by the four iwans; thus the horizontal "bent" sequence is amplified by a dramatic play of light. In this example, however, the ziyada, which is open to the sky, is cleverly exploited to fulfill the purpose of the dark passage. Coming from out of doors one turns left into the open ziyada and walks in the shadow of the surrounding walls, then turns right into the shaded area underneath the covered portico and walks through the mosque's door to find oneself underneath a huge dome. The dome lets in light through the windows around its drum whose brightness contrasts with the daylight filtered through the grilles on the windows in the walls. 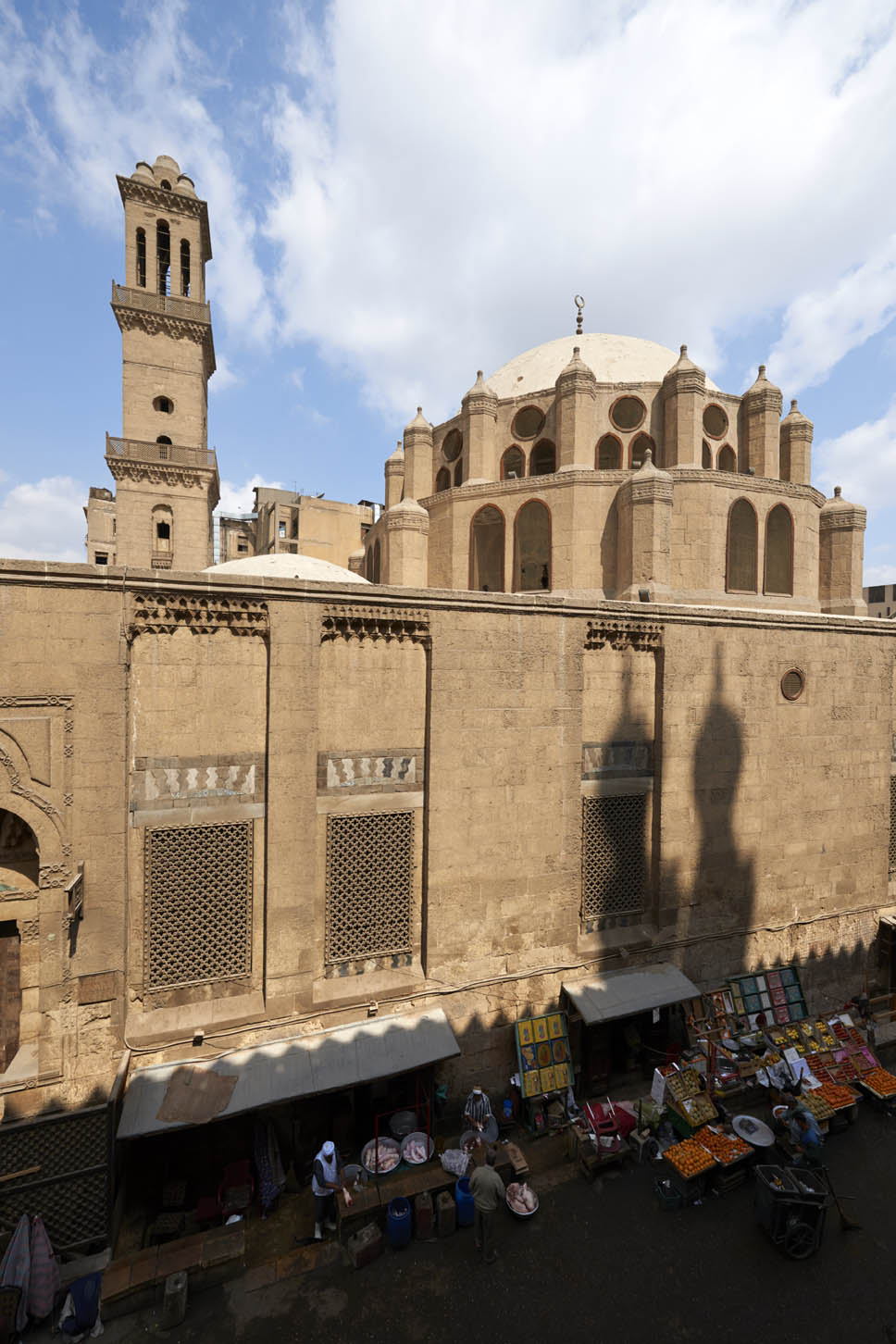