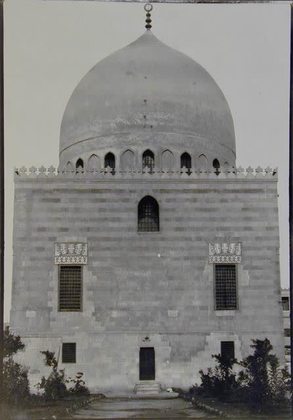 Share
The Qubba al-Fadawiyya is attributed to Sultan Qaytbay by its founding inscription. This curious structure was started by Amir Yashbak in 1479; he also built a similar qubba south of Matariyya in 1477. It is frequently mentioned in the chronicles in connection with processions, ceremonies, and banquets of the sultan and his companions. This Sufi foundation once stood near a hippodrome and enjoyed the view of an artificial pool dug by the founder. It was connected to the Husayniyya quarter by a long passage supported on an arcade which is no longer extant. The building consists of a free-standing cubical mosque covered entirely with a dome, a feature unusual in Mamluk mosques. The brick dome, the largest of its kind in Cairo, rises directly from the walls of the cubical building without an intermediate transitional zone on the exterior. The interior, however, displays a transitional zone consisting of a trilobed squinch set in the walls of the cubical structure. This squinch recalls the trilobed groin vault crowning portals from this period.

The structure is related, both in form and function, to five contemporary foundations in Cairo: the Ma'bad al-Rifa'i built by Barsbay in 1433 (restored 1478), the two domes of Gani Bak at Qasr al-'Ayni (1462), the dome of Yashbak near Matariyya (1477), and the dome of Zawiyat al-Damirdash (before 1496). Except for that of al-Damirdash, none of these domed structures is known to have been the burial site of anyone. The domes of these structures depart from those contemporary royal mausolea in being brick constructions carried by large squinches, in their abandonment of the elaborately articulated transitional zone, and in their plain exterior. The departures indicate that this new type fulfilled a set of requirements different from those of the royal mausoleum.

This single-domed prayer chamber is a novelty in Cairene Mamluk architecture; it was chosen instead of the standard iwan, hypostyle hall, or qa'a, possibly because a single dome could suitably serve as an adequate roof for a square chamber to form an independent, free-standing unit. These qubbas probably served as stages for Sufi performances which the sultan and his companions attended. The word qubba may have been used by historians to distinguish this type of aristocratic zawiya from the standard zawiya which sponsored popular Sufism.

Behrens-Abouseif, Doris. "The Northeastern Expansion of Cairo under the Mamluks." Annales Islamologiques 17 (1981): 157-189.