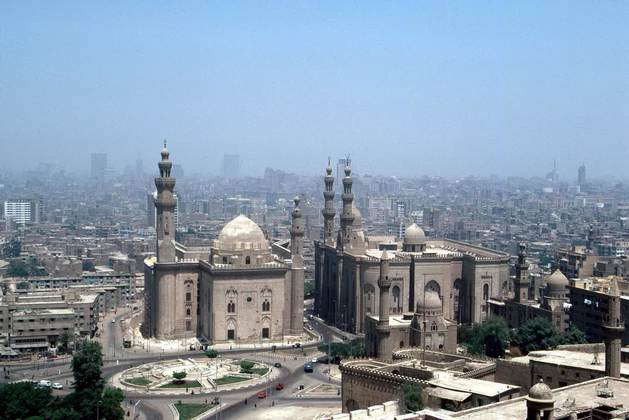 Share
In 1869 Husayn Fahmi Pasha al-mi'mar (the architect), a prince from the royal family who went to France in 1840 as part of Muhammad 'Ali's fifth and largest educational mission, was commissioned by Khushyar Khanim, mother of Khedive Isma'il, to replace the zawiya of al-Rifa'i and its revered mausolea with a dynastic mosque that would house, in addition to the Sufi relics, the tombs of the royal family. However, he died during the first phase of construction, which came to a complete halt shortly after the abdication of Khedive Isma'il in 1880. Work was ordered to resume in 1905 by 'Abbas Hilmi II, who entrusted Max Herz Bey, the Hungarian architect in charge of the Committee for the Conservation of Arab Monuments in Cairo, to complete the mosque. Herz was aided by the Italian architect Carlo Virgilio Silvagni, and advised by 'Ali Pasha Mubarak, the Minister of Public Works under Khedive Isma'il. The mosque was completed in 1912.

This monument represents a turning point in the cultural and political history of Egypt. It looks onto straight boulevards and open squares, two aspects of European city planning introduced during the reign of Muhammad 'Ali and his successors, who sought to transform Egypt's traditional society into a cosmopolitan one. Designed as a free-standing monument, the Mosque of al-Rifa'i responds to its site by presenting four fully articulated facades in addition to a highly decorated, Mamluk-style dome and minaret.

The mosque is the architectural expression of the dynasty's new quest for legitimacy through the use of national symbols. The mosque's association with the Mamluk legacy is manifested by its remarkable emulation of the massing, use of material, color, and details of the adjacent Mosque of Sultan Hasan. Its integration in the urban context of a popular zawiya is a clear indication of the dynasty's desire to appeal to much-needed popular support in the face of increasing British control.

This rediscovery of the past was ironically facilitated by European scholarship and systematic study of Egypt's Mamluk architectural heritage, best represented by the Description de l'Egypte produced by the Napoleonic expedition and the Architecture arabe des monuments du Caire by Muhammad 'Ali's French architect Pascal Coste. Nevertheless, historicism here is reduced to eclectic surface decoration; the mosque's axiality and abandonment of intricate Mamluk spatial configurations in favor of a rational plan clearly reflect the architect's preoccupation with the 19th c. Beaux-Arts classical revival.