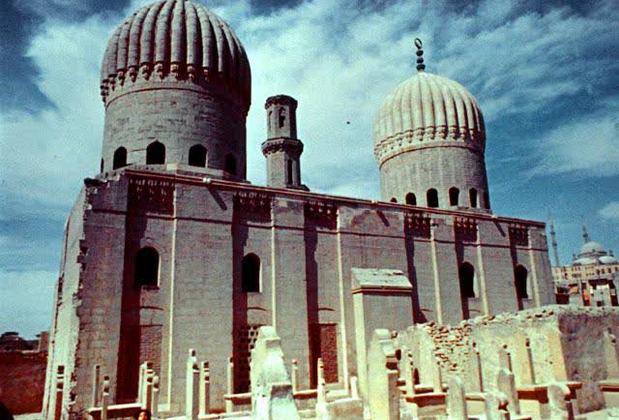 Share
The Mausoleum of al-Sultaniyya was constructed in the 1350s-60s, and is possibly the mausoleum of the mother of Sultan Hasan. It is a remarkable example of the inventiveness in ribbed stone domes characteristic of the period between 1346 and 1400. The domes have double shells, a feature common in brick domes of Persia, but here it is translated into stone, a development not without precedent in Cairo. The ribbing of the domes is Fatimid in origin.

The double domes on the Sultaniyya were probably an imitation of a feature common to brick domes of Persia. The outer dome allowed for a high visible exterior profile, while the inner dome provided an interior covering proportional with the chamber. Here it is translated into stone, a development not without precedent in Cairo (the spiral minaret of Ibn Tulun is an interpretation of that of al-Mutawakil in Samarra into stone, and the garlic-shaped minaret tops of the Mosque of al-Nasir Muhammad at the Citadel are a translation of similar Tabrizi brick forms in stone.)

Unlike the Fatimid-style ribbed brick domes, the Mamluk ribbing of stone domes was not hollow, i.e., it was convex on the outside but not concave or fluted on the inside. This new technique was very popular up to the introduction of the decorated (carved) stone domes, the earliest example of which is the dome of Amir Mahmud al-Kurdi (1394-5) with the exterior displaying chevrons (zigzag) moldings, the first genuine decoration for Cairene stone domes.

The double shells, high drums, square Kufic inscriptions around the drum of the northern dome, and ribs ending in muqarnas corbels are Persian features to be seen later in Timurid Samarkand. This Persian-style ribbing which ends with stalactites was assimilated into the ribbed, single-shell stone domes of the local Cairene school, as exemplified by the elongated dome of Yunus al-Dawadar constructed in 1382.

The plan is composed of a central iwan flanked by two identical domed structures, as well as the prayer niche of the iwan, which consists of a carved stone conch with muqarnas.