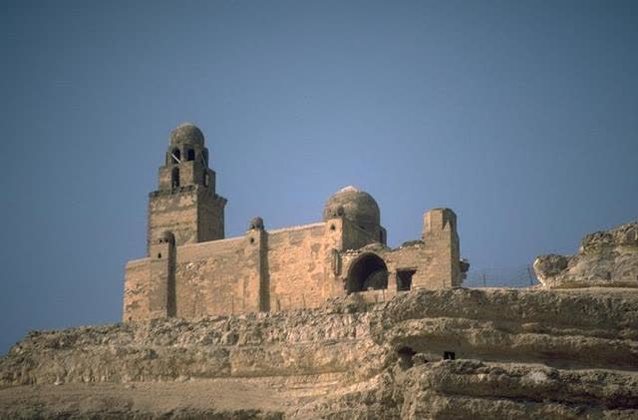 Share
Although a number of purposes have been suggested for this building, which was built for Badr al-Jamali in 1085, the novel composition of its forms, along with their miniature size, especially when perceived in its particular setting, render its true function mysterious.

It is a symmetrical rectangular structure constructed of rubble masonry and brick. The entry vestibule leads to a minute courtyard, flanked on both sides by vaulted rooms, possibly intended for residential purposes, for they have no access to the prayer hall. A transitional, cross-vaulted vestibule, defined by a triple-arched portico on its courtyard side, leads to the square dome chamber as well as to two cross-vaulted extensions to the right and the left. Although dedicated as a "mashhad" according to its inscription, this enigmatic structure is not known to be the burial site of anyone.

The minaret over the main entrance, which is the earliest extant tower in Egypt to be attached to a structure that is not a congregational mosque, displays the earliest extant muqarnas cornice in Egypt, which is employed here to emphasize the visual separation of the parts of the minaret. Since the second occurrence in Egypt of this muqarnas feature, which is in the wall of Cairo next to Bab al-Futuh, is also attributed to the Armenian vizier and former governor of Syria, Badr al-Jamali, it has been suggested that this Persian motif was introduced into Egypt through Armenian and Syrian mediation. The square shaft of the minaret is also believed to be of Syrian inspiration.

A striking feature of the interior is the mihrab, which is framed by a panel of alternating bands of Qur'anic inscriptions and arabesque leaf patterns, all in carved stucco. Oleg Grabar has suggested that this mashhad was a victory monument commemorating Badr's restoration of order for the Caliph al-Mustansir. The appearance on the roof of domed edicules too small for any religious function and the exaggerated size of the minaret for an underpopulated area like al-Muqattam have prompted others to reinterpret this structure as a fortified watch-post located strategically at the edge of the capital and disguised as a small mosque.

Shafe'i, Farid. "The Mashhad of al-Juyushi." In Studies in Islamic Art and Architecture in Honour of Professor K.A.C. Creswell, 237-252. Cairo: American University in Cairo Press, 1965.