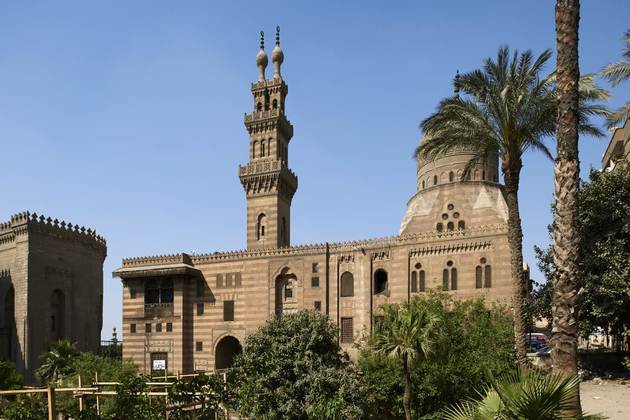 Share
This mosque complex belongs to Qanibay al-Sayfi, also known as al-Rammah ('the lancer'), who was amir akhur kabir, or grand master of the horse, during the reign of Sultan al-Ghuri. It was built in 1503-1504/908 AH on a large site on a hill overlooking the hippodrome and the Madrasa-Mosque of Sultan Hasan. The site is appropriate, since the horse market and stables of the Citadel were originally located just off the maydan.

The complex has a main facade that takes maximum advantage of the view and at the same time exposes itself to the crowds below. The complex projects a long front facade that includes the sabil-kuttab, minaret, trilobed groin-vaulted portal, windows inside large rectangular panels, and a stone dome. The dome is embellished by a handsomely carved arabesque pattern with triangular corner supports.

The hill's slope presented a challenge which the architect cleverly overcame by raising the mosque on storage rooms so that the various parts of the facade would be at the same height; the top has one continuous line of crenellations, contributing to its uniformity and coherence.

The interior follows the qa'a plan; the qibla iwan is roofed by a shallow vault on pendentives. The opposite iwan is covered by a cross-vault. The minaret is entirely rectangular. Both minarets of Qanibay are surmounted by a double-headed structure, a departure from the standard bulb carried on eight columns.

The complex was first restored in 1895, and underwent restoration again in the early 2000s.