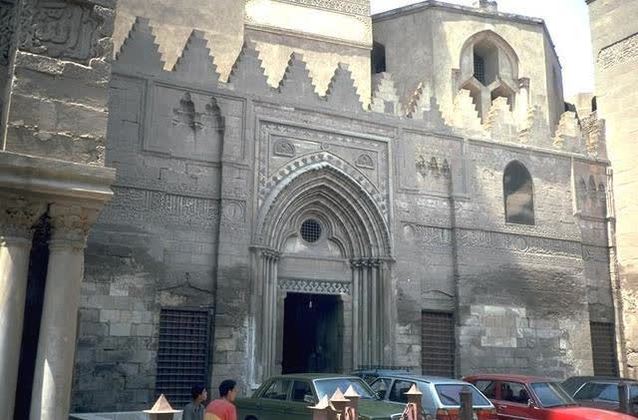 The portal, a remarkable piece of Gothic marble work, is a trophy seized from a church in Acre, the last Crusader stronghold in Palestine. It was brought to Cairo at the behest of Sultan al-Ashraf Khalil, who conquered Acre in 1291, and was assimilated into the facade of the madrasa by al-'Adil Katbugha.

The minaret is one of the few in Cairo decorated with stucco carving. Here it includes recesses flanked by engaged colonnettes and surmounted by fluted shells with scalloped edges. These shells recall those adorning Fatimid and Ayyubid facades and mihrabs. The stucco floral patterns, which fill the space between these recesses as well as the space between the medallions above the recesses, are characteristic of stucco carving from this period.

The body of al-Nasir Muhammad was interred in the mausoleum of his father Qalawun instead of the mausoleum which he had built for himself as part of this foundation. However, it is the burial site of his mother Bint Sukbay, whose body he transferred from the Mausoleum of Fatima Khatun upon the completion of this mausoleum, as well as his son Anuk, who died in 1340-1.

The madrasa accommodates all four of the Sunni schools of jurisprudence, one of only three in Cairo which does so. The tunnel-vaulted student cells occupy the lateral sides of the courtyard. Since the two side iwans (Hanafi and Hanbali) are narrower than the qibla iwan (Maliki) and the one facing it across the courtyard (Shafi'i), several stories of inward-looking living units are placed in the corners between the lateral iwans and the major ones.

Unique among Cairene monuments are the raised, egg-shaped stucco bosses in high relief with punched ornament decorating the hood of the mihrab in the qibla iwan. This is also the last stucco mihrab in Egypt. The back wall in both the southeastern (qibla) and northwestern iwans incorporates an air shaft or malqaf that terminates in a recess on the back side of the northwestern iwan. This rectangular vertical shaft ran upwards in the thickness of the wall to the roof, where it was once covered by a hood with a sloping roof. Its sides were closed except the one facing north, which traps the prevailing breeze and deflects it downwards.