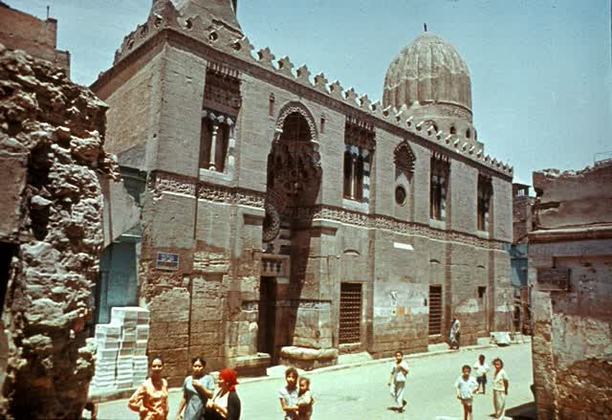 Share
The complex of Amir Ahmad al-Mihmandar was built in 1324-1325/724 AH for the mihmandar (chief of protocol) of al-Nasir Muhammad, with its four-iwan madrasa dedicated to the Hanafi rite.

The facade, with its twin windows in recessed panels crowned by stalactites, its muqarnas portal displaying virtuoso decoration, and its continuous line of crenellation along the summit, illustrates the Mamluk style which was established early and persists in religious buildings to this day. The crenellations have a trefoil outline which may be the second earliest appearance of such feature in a Cairene monument, the first being the foundation of Salar and Sanjar. A continuous tiraz band runs completely across the facade. The elaborate muqarnas portal is adorned with an oculus above the doorway lintel and below the muqarnas hood. The continuous tiraz band turns into this entrance bay and continues above the oculus in the form of a curved band outlining the shape of this circular opening. The qibla iwan is separated from the courtyard by an arcade on two marble columns forming a wide opening flanked by two narrower ones.

The functional fusion of the madrasa with the khanqah and the structural integration of the domed chamber with the four-iwan court are developments from the pattern set by the Khanqah of Baybars al-Jashankir, where the mausoleum is contained within the body of the four-iwan khanqah, but separated from it by the circulation system. This integration was adopted in the zawiyas of the Southern Cemetery and might be attributed to the fact that the founder and the resident shaykh were the same person. This integration made it possible to place a door on one of the sides of the mausoleum which opens directly onto the qibla iwan or sanctuary. This direct access between the mausoleum and sanctuary in a Cairene foundation is a development from the mere visual link found in other foundations. The minaret was added by Sulayman Agha al-Qazdughli in 1722-1723/1135 AH.

The stained glass windows, minbar, and wooden dikka across the north iwan all belong to the restoration of Sultan Ahmed III in 1722-1723.