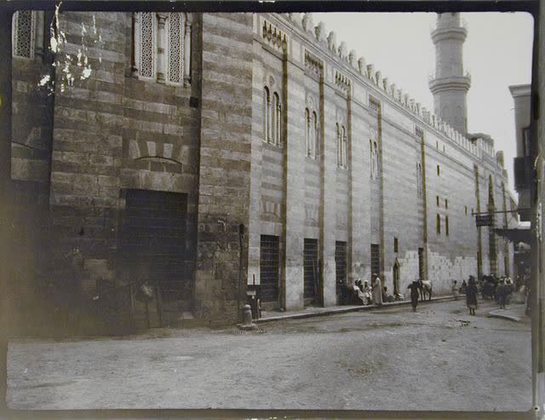 Share
Although the khanqah and the mosque of Shaykhu are separated by six years, they have similar facades, portals, and minarets. The two buildings face each other across Sharia Saliba with almost identical exterior aspects, yet the interiors serve completely different purposes. By flanking - and thus framing - the street, the two opposing minarets and portals produce the effect of a monumental gate rendering the segment of the processional al-Saliba Street, defined by these two parallel facades, part of the complex of Shaykhu.

The khanqah built by Amir Shayku in 1355 does not follow the typical madrasa layout. On the qibla side of the courtyard is a hypostyle prayer hall; on the three other sides are several stories of living units for sufis.

The plan of a Cairene Mamluk religious foundation consists of superimposed patterns, an irregular one determined by the street grid and boundaries of the site, and a second coherent, highly rationalized scheme with a clear spatial hierarchy designed to yield a particular sequential experience. These schemes are mainly represented by two general configurations: one, a hypostyle prayer hall which opens onto a square or rectangular courtyard surrounded by arcades, and the other, four iwans each opening onto one of the four sides of a square or rectangular courtyard accessible from the street by means of a bent entrance. Not only were these schemes introduced into the irregular sites of the densely populated city of Cairo, but they also had to be rotated towards Mecca, two major challenges Egyptian architects from the Mamluk period ingeniously met without sacrificing either the integrity or the purity of the spatial components of the scheme, two planning ideals with which this architect was preoccupied.

A good example of a foundation whose plan exhibits the two contrasting patterns is provided by the Khanqah of Shaykhu, where they are distinguishable both by geometry and orientation. Their superimposition, however, creates an awkward divergence between the courtyard's street side and the street facade. This is cleverly rectified by introducing an iwan, whose trapezoidal layout follows the two diverging grids (patterns) at the same time, between the two walls, thus serving as an interesting reconciliation between the street (site) grid and the spatial scheme of the khanqah.