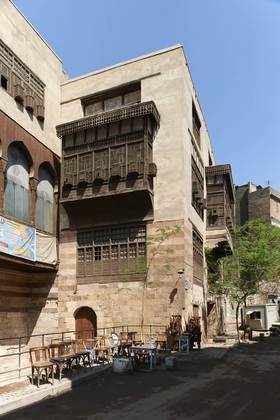 Share
This sprawling three story palace was originally two separate residents divided by an alley, one house dating to the fifteenth century/ninth century AH and one house dating to 1778/1192 AH. Ahmad Katkuhuda al-Razzaz acquired the entire property in the late eighteenth century, and likely joined the two houses in the early nineteenth century, creating a complex of more than 190 rooms. A passage from the southwestern corner of the courtyard of the 15th century house leads to the courtyard of the second house. The groin-vaulted stone entrance onto the Suq al-Silah, now partially collapsed, seems to have become the principal entrance to the combined properties.
There are significant Mamluk remnants to both buildings: the first (eastern) house incorporates a palace built by Sultan Qaytbay in the 15th century, with a a doorway dated to ca. 1480/884 AH and bearing the cartouches of Qaytbay remaining in the eastern courtyard. An Ottoman qa'a at the second level overlooks the Shari' al-Tabbana has painted wooden ceilings, restored colored windows, and elaborate mashrabiyas. An extensive underground conduit system was discovered, showing that a water and waste disposal system was part of the original house.
The second (western) house has the only surviving maq'ad in its courtyard, and a large likely-Mamluk-era qa'a sits at ground level off of the courtyard. The hall is in ruinous condition but still has remnants of its former magnificence, including a four meter high cornice, a central fountain, and painted ceilings. The side iwans have mashrabiya galleries, and there is another qa'a and private bath area upstairs.
The house has been unoccupated since the 1960s, and has been owned for many decades by the Ministry of State for Antiquities (formerly the Supreme Council of Antiquities). Efforts to restore the house began in the late 1970s, led by the American Research Center in Egypt. An award-winning restoration of the eastern half of the house was completed in 2007, but the western half remains in needs of rehabilitation as of 2014.
Sources: