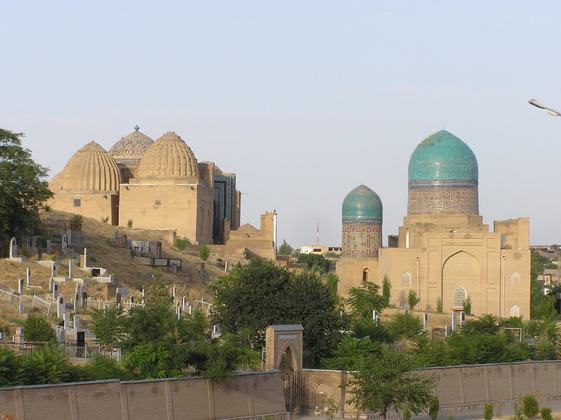 Share
The Shah-i Zindah (lit. “the Living King”) is a funerary complex, located on the south side of the Afrasiyab hill in the city of Samarqand. The focal point of the complex is the shrine of Qusam b. Abbas, a cousin of the Prophet Muhammad, who was reportedly beheaded on a site near Samarqand’s wall during the seventh-century Arab conquests of Transoxania. The legend, which became popular in the Timurid period, relates that Qusam, carrying his head in hands and led by the prophet Khizr, descended into a well, where he resides eternally in an underground palace as a “Living King.” Some scholars suggest that the site was a venerated place before the arrival of Islam, in part because of the reference to prophet Khizr and the story of the Source of Life, but also due to the existence of a spring, historically associated with immortality.

Archeological studies, however, indicate that the earliest structures of the Shah-i Zindah date from the eleventh century of the Common Era, when the shrine and its adjoining buildings were located at an intersection within a populated area of ancient Samarqand, (which is now a mound called Afrasiyab, to the north of the city.) Archeological excavations have also revealed traces of an eleventh-century four-iwan madrasa (probably the first instance of the institution in Samarkand) erected opposite the shrine by the order of the Karakhanid ruler Tamghach Bughra Khan (reg. 1052–1066). Nevertheless, it was after the Mongol sack of the city in the early thirteenth century that, following the relocation of central Samarqand from Afrasiyab hill to its present place, the site turned into a necropolis. The tombs first erected clustered around the Qusam’s shrine at the top of the hill, and the later structures descended the southern slope in a long string. The bulk of the structures were constructed between 1370 and 1405, mostly for the female members of the Timurid family. The final form of the complex was shaped in 1434-5, when Ulugh Beg, Timur’s grandson and the governor of Transoxiana (1409–1447), erected a monumental gateway at the southern end of the alley, which provided a well-defined ceremonial entrance for the complex and linked the necropolis to the city. Later interventions had minimal impacts on the general organization of the site.

Ascending from the southern slope of the Afrasiayab hill, the Shah-i Zindah complex consists of a narrow 200-meter alley or corridor, lined with some 40 funerary buildings, nearly half of which were revealed in excavations. The standing monuments can be grouped in three clusters, marked by a succession of three chahar taqs (domed crossings).

A typical mausoleum at Shah-i Zindah consists of a square tomb chamber, covered with a double shell dome and fronted by an arched portal (pishtaq) oriented toward the corridor. Below the tomb chamber is the crypt (sardab), where the actual grave is located. While the portals facing the corridor are clad in elaborate tile decoration, the other sides are left plain or enlivened with simple geometric designs in brick. A typical interior is adorned with tile mosaic or carved and painted plaster.

The ensemble is accessed through a high iwan, decorated with banna’i brickwork, which together with two flanking halls formed the monumental gatehouse (dargah) of the complex. Known as the Dargah Abd al-Aziz, this gateway takes its name from Ulugh Beq’s son, Abd al-Aziz, according to the remains of an inscriptive band running inside the arched recess of the portal. Passing the entrance door, the visitor enters a cruciform vestibule (the first chahar taq).

To the west is the remnant of the original flanking halls, which once consisted of a central domed space with two adjoining rectangular bays, and now serves as a museum. To the east is a madrasa built in the early nineteenth century. Some 20 meters beyond the gateway, a set of steep stairs ascends the hill. Originally, this sequence featured a series of terraces, built at the same time as the gateway in a campaign to provide a ceremonial entry to the ensemble. To the west of the stairs stands the twin-domed Anonymous Mausoleum III, formerly known as Qazizadeh Rumi Mausoleum (1425), whose shimmering turquoise domes rise on high drums decorated with hezarbaf inscriptions.

The stairs lead up to the second dome crossing (chahar taq), then to a cluster of well-preserved mausoleums with high portals shading the corridor. To the west are the Amir Zadeh Mausoleum (1386) and the Shad-i Mulk Aqa Mausoleum (1371-83), and to the east are the Tughluq Tekin Mausoleum (1376) and the Shirin Beg Agha Mausoleum (1385-86), followed by the Octagonal Mausoleum. While the first three are covered with ribbed domes that have lost their tile revetment, the bulbous dome of the Shirin Beg Agha on its high drum still boasts its tile decoration. The rest of the alley that leads to the last chahar taq (and the shrine of Qusam) is lined with mausoleums that came to light via excavations and were recently reconstructed. Of the tomb chambers located at the core of the alley, only two on the western side have survived in part: the first is the Anonymous Mausoleum I (c. 1380), also known by the name of its craftsman, Ustad Ali Nasafi, followed by the Anonymous Mausoleum II (c. 1385), of which only the elevation is original.

The third cluster of buildings is grouped around the sanctuary of Qusam. The first building to the east is the Amir Burunduq Mausoleum (attributed to a general of Timur), built on the northeastern corner of the eleventh-century madrasa. Below the chahar taq to the east is an elaborate carved wooden door, dated to 1404-5 and signed by Seyyed Yusuf Shirazi, which opens to the shrine complex of Qusam. Opposite this door is the main entrance to the rectilinear hall (mosque or khanghah) of the Tuman Aqa Complex (1404-5). Passing the chahar taq, the visitor arrives in a small courtyard enclosed by three structures: the northern end is marked by the Khwaja Ahmed Mausoleum (mid-fourteenth century), and to the east, the Mausoleum of 1361 (erected for an anonymous female patron) and to the west is the Tuman Aqa mausoleum, whose high turquoise dome dominates the courtyard.

The most striking aspect of the Shah-i Zindah is its exquisite tilework. The decorative programs of the funerary buildings display a wide range of motifs, materials and techniques. While the earlier tombs are decorated with cuerda seca, or monochrome unglazed covering, the later mausoleums are clad in polychrome glazed revetment. As a funerary complex, the Shah-i Zindah also features a rich epigraphic program. The portals feature several inscription bands, Koranic in the main but which also include sayings and poems in Persian. The inscriptions also give the names of the patrons and the craftsmen.

Inscribed in the World Heritage List, the Shah-i Zindah complex has been continuously excavated, studied and reconstructed since the 1920s. The surrounding areas of the necropolis are still used for burials.