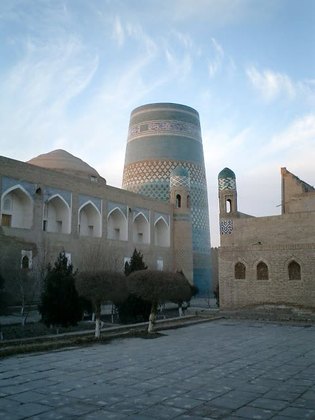 Share
The madrasa was built as the largest residential theological school in Khiva, housing over two hundred and sixty students in 1851-52. It was constructed within an extensive urban development program commissioned near the Ata darvaza (father's gate) or western gate of the Ichan-Kala (inner fortress) by Qungrat ruler Muhammad Amin Khan (1845-55). An attempt to reflect the glory of the then waning Khanate, the madrasa was conceived with an ambitious plan that involved partially demolishing city walls for space, and possibly tallest minaret in Central Asia. The abrupt death of Muhammad Amin Khan in a battle against the Teke Turkmen in 1855, and subsequent rebellions stalled construction to leave the incomplete minaret or Kalta Manar (short minaret) a distinctive element of Khiva's skyline.

The madrasa features the traditional Timurid, four-iwan typology with a two-storied arrangement of student cells (hujra) around a large central court with unbroken exterior walls, magnified portal (pishtaq) and four corner towers (guldasta). The madrasa's raised front terrace accommodates shops opening out to Ichan-Kala's primary east-west street, isolating the complex from the city's surrounding bustle. A modest portal and staircase leads off the street and ascends the plinth to reach the madrasa's ornamented north façade, opposite the Kunya Ark. Sited to the entry portal's east and connected to the Kalta minar is the madrasa's chapel mosque. This interior space is expressed externally by a shallow, conical dome atop a high cylindrical drum, and thus deviates from the traditional Khivan madrasa's symmetric façades. The smaller darshkhana classroom space to the pishtaq's west also features a low dome, but this barely perceivable from the street.

The madrasa is unique in Khiva for its layout of deeply recessed loggias or vestibules in the front of upper story hujra cells, and ancillary premises on the ground floor. However, the inner court's relatively low axial portals fail to relieve the horizontality and monotony of the repetitive loggia arches. A wood walkway connects the northeastern guldasta tower with the twenty-six meter high and fourteen meter wide Kalta or Kok minar (green minaret), so known for its elaborate, alternating ornamental bands of glazed brick and majolica décor. The upper floor balcony overlooking the doorway of within the deep, central pishtaq also features intricately worked wood railings (panjaras). The main façade and inner portals are decorated with traditional but unexceptional Khorezm majolica, wood workmanship and polished brickwork.

This madrasa, not to be mistaken for the earlier madrasa of Muhammad Amin Inak (1765), also housed a library and a Qazi's office (Religious Court) till the Russian invasion of the Khanate in 1837. Since the late Soviet period, a luxury hotel has been operating from the premises, ensuring upkeep but restricting public access to the monument.