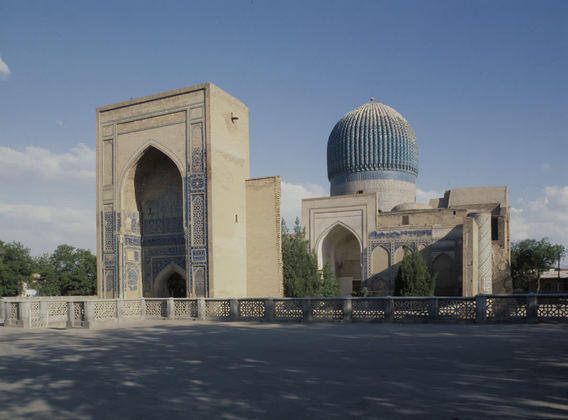 Share
Timur built this celebrated monument as the resting place of his grandson and heir-presumptive Muhammad Sultan, who died in battle in 1403 at the age of 29. In 1405 Timur himself was interred here, and later so too were his sons Miranshah and Shah Rukh and grandson, Pir Muhammad. Timur's spiritual advisor, Sayyid Barakah, also lies within. Ulugh Beg, who had established the tomb as the Timurid dynastic mausoleum and commissioned additions, was the last of the family to be placed within the crypt.

The mausoleum was constructed on the southern side of a walled square courtyard already defined on two sides by a madrasa and khanaqah, no longer extant. Minarets marked each corner of the courtyard, two of which remain in part. The plan of the mausoleum forms a modified octagon on the exterior: a projecting entrance portal extends the northern side of the octagon, decreasing in length the two flanking sides. A bulbous ribbed dome on a tight high drum presents a monumental profile visible across the city.

The interior comprises a square chamber, a bay on each wall, a stairway in the southeast corner that leads to the cruciform crypt, an octagonal zone of transition and an unusually steep hemispheric dome. Vertical flanges linked with timber are concealed between the two shells of the dome, supported by the inner dome and providing structure for the outer dome; an invisible 'column' built on top of the center point of the inner dome terminates in angled timber prongs that also support the outer dome.

In 1424 Ulugh Beg added a corridor known as his 'gallery', entered through the eastern bay of the mausoleum. Four vaulted bays form the corridor, leading to a small vestibule accessed from the courtyard. In the seventeenth century construction of an iwan on the western side of the mausoleum commenced, but remained unfinished.

The exceptional interior decorative scheme employs luxurious materials and a wealth of techniques. Onyx hexagons form a dado, capped by a shallow cornice of marble muqarnas. Above this, a gold inscription band painted onto jasper encircles the mausoleum. Constituting one of the earliest examples of this technique, papier mache was employed extensively; the interior dome, the zone of transition and the muqarnas vaults of the four bays were all decorated with painted molded paper. Other areas were plastered and painted, or covered with a revetment of various materials.

The exterior decoration employs extensive hazarbaf brickwork. The dome is tiled in two tones of blue. Bands of tile inscriptions encircle the drum; a monumental kufic inscription of white and black tiles repeats "God is eternal".