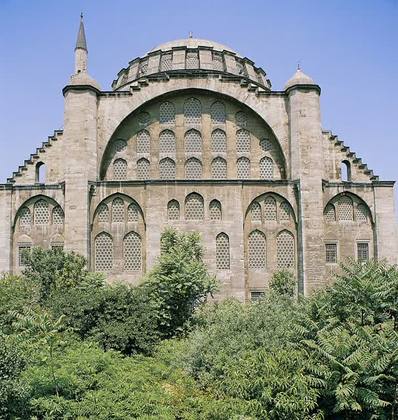 Share
The mosque complex of Mihrimah Sultan, daughter of Sultan Süleyman the Magnificent (r. 1520-1566/926-974 AH) is the second complex to bear her name and one of the projects she supervised and commissioned during her widowhood. Sinan, the chief architect of the Ottoman court under Süleyman and his successors, designed the mosque. There are no inscriptions dating the mosque, but documentation of the permit-granting process and knowledge of Sinan's other projects suggest that it work begin in or after 1563/970-971 AH and was completed after the death of Süleyman in 1566/974 AH and before Sinan's departure to Edirne to construct the Selimye in 1568-1569/976 AH.1 The complex includes a mosque, madrasa, mausoleum, baths, a fountain, and stores.
Layout
The site is situated immediately inside the gate in the old city walls known as Edirnekapı, which was a key monument along the ceremonial route from the imperial palace toward the city limits and beyond to Edirne. The complex is built on the slope of a steep hill leading up to the walls and the various buildings are terraced accordingly, with the mosque and madrasa higher up (on the northwest side of the complex toward the walls), and the mausoleum, baths, and public fountain on the bottom of the site toward the city on the southeast.
Visitors enter the mosque from one of two main gates: an eastern gate along the main road to Edirnekapı, and one opposite it on the complex's western border, off a narrower lane. Both lead through domed bays onto a flight of stairs ascending to the platform of the mosque and madrasa, which form one joint building. Shops used to line the perimeter of the complex below the platform facing onto the streets, but these have disappeared.
The mosque and madrasa
Emerging onto the open platform from either east or west gate, one finds the arched entrances to the madrasa located directly to the north. These lead through a narrow corridor onto the corners of a large rectangular courtyard, which measures about fifty-seven by twenty-one and a half meters, with a fountain at its center. The courtyard is surrounded on three sides by a portico that is one bay deep. Each bay has its own dome, for a total of thirty-six. Eleven student cells are found behind the eastern portico and nine are located behind the western portico; however, because of the site constraints, no student accommodation was built behind the northern portico. In this configuration, the madrasa functions as an enclosure, and classroom activities are shifted to the mosque.
The south end of the courtyard is framed by the portico of the mosque. Surmounted by seven domes, each six meters in diameter, the portico of the mosque contains larger bays than the enclosure portico. These seven domes are carried by eight columns on the north, and rest on octagonal drums. Just behind the portico, the dominating single dome of the mosque rises thirty-five meters above the ground. Spanning twenty meters, the dome is carried over an almost skeletal system composed of four "elephant feet" (massive piers) and the arches between them. These polygonal piers, mostly projected on the façade for creation of a more spacious interior, rise to the level of the drum and increase the total mass available to support the load of the dome. An innovative design, this addition of these structural piers allows for a shift from purely load-bearing to thinner, heavily fenestrated walls. Thus, all four tympana feature three rows of windows with seven arched windows at the bottom, five arched and two circular windows in the middle, and three arched and two circular windows at the top. The dome itself also features twenty-four windows, greatly increasing the quantity of natural light within the interior; the total number of windows in the prayer hall is close to two hundred. Along the east-west axis of the prayer hall, the mosque has side bays, each of which are topped by three domes. Measuring six meters in diameter, these domes sit on columns with carved stalactite capitals. The height of these side bays is almost half that of the central space, and they include three rows of windows, the same number found in the large tympana of the main dome. The mosque has a slim minaret with a single balcony constructed of stone that corresponds to the western bay of the portico.
The luminous interior of the mosque features a marble mihrab with muqarnas carvings; the minbar, also of marble, stands to the west of the mihrab niche. Chasings, restored in the last renovations, and stained-glass windows add to the interior ornamentation. The mosque was partially damaged in several earthquakes, including in 1648, 1690, 1714 (when its domes were destroyed), and in 1894, after which it was temporarily closed. The Mihrimah Sultan mosque was most recently restored in 1956 and 1957.
The mausoleum
Below the platform of the mosque-madrasa building (to the southeast) lies a large enclosure occupying a rectangular space used as a cemetery. At its western end is an L-shaped building that serves as the burial place of Güzelce Ahmed Paşa, the son-in-law of Mihrimah Sultan and vizier to sultan Selim II. The long arm of the L has three bays: a central domed bay and two smaller, rectangular bays flanking it to the north and south. The short arm has two rooms: one with a small dome.
The baths and fountain
The baths and fountain are located to the southeast of the complex, across a lane. These suffered significant neglect and were used as storage areas at one point.
Notes:
Sources: 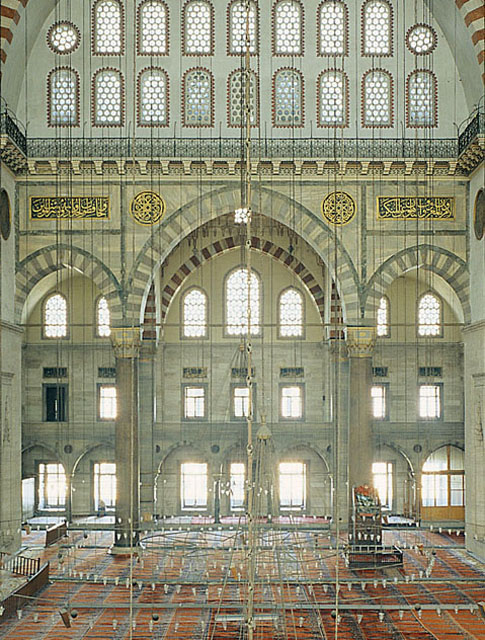