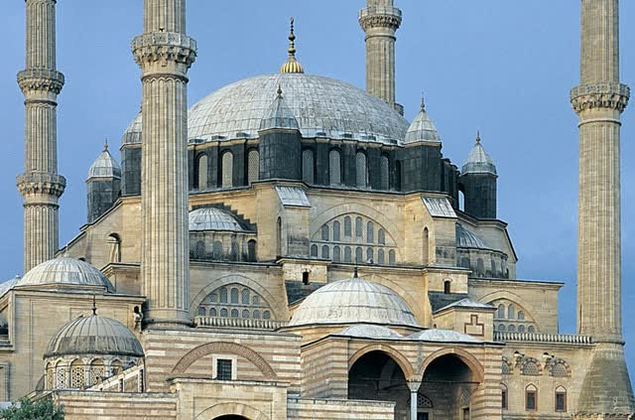 Selimiye Külliyesi is a mosque complex located at the center of the old city of Edirne, whose skyline it dominates even today. It is one of the last works of Mimar Sinan, the imperial architect to Ottoman sultans Süleyman, Selim II, and Murad III, constructed in 1568-1574/976-982 AH when the master builder was in his 80s. With an imposing and unobstructed central dome to rival that of Hagia Sophia, and four soaring minarets to rival those of the neighboring Üç Serefeli Mosque, the Selimiye represents a high point in Sinan’s oeuvre and in imperial Ottoman mosque architecture more broadly.1

The complex includes a large mosque as well as a religious school (medrese), a primary school, and a marketplace (arasta). It is laid out on a rectangular compound enclosed by a wall with several gates on each side. The main entrance is on the northwest side of the rectangular enclosure (the side opposite the qibla). Entering the gate, one emerges onto a large open space that surrounds the mosque on three sides. The main entrance to the mosque is situated directly across the open space from the main gate in the enclosure wall.

The mosque is the central building of the complex, rising in height above its surroundings. Its plan consists of a rectangular outer courtyard and a rectangular prayer hall, both measuring about the same in area. The exterior form of these two components is conceived to call attention to the massive central dome that dominates the entire building. The courtyard is kept relatively low, with unobtrusive, small cupolas. The prayer hall takes the shape of a block that tapers in three tiers to an octagonal drum with decorative buttresses ending in pinnacles that draw the eye upward toward the lead-covered dome itself. The mosque’s four very tall and slender minarets with vertical flanges and conical roofs are placed at the corners of the domed cube, again drawing the eye upward.

The interior of the front courtyard is paved with slabs of white marmara marble with blue-grey striations and surrounded by a revaks (Ar. riwaqs or arcades) on three sides. The portico of the prayer hall, taller than the other arcades to match the proportions of the hall, occupies the fourth (southeast) side of the court. The pointed arches of the arcades and portico are enhanced with blocks of red and white stone masonry in alternation. Between the arches on the prayer hall portico, roundels with geometric motifs add visual interest. A fountain carved from pure white marble occupies the center of this court.

Stepping through the portico before the prayer hall leads through a monumental portal carved from slabs of striated marble surmounted by a muqarnas hood. One emerges from this portal onto the space directly under the prayer hall’s monumental central dome. The dome rests on eight massive columns that support eight pointed arches and form an octagonal baldachin. The spaces between the eight arches supporting the dome are carved with large muqarnas cells. The drum of the dome is pierced with numerous tall, thin windows that flood the space with light. The interior surface of the dome is decorated with a large shamsa (sunburst-medallion) that itself encloses smaller medallions filled with Arabic calligraphy.

On the ground level of the prayer hall, a platform for the muezzins (callers to prayer) is situated directly under the dome. It is square in form and rests on twelve columns supporting three pointed arches per side. Aside from a tall, thin, minbar placed against one of the eight pillars supporting the dome, nothing else obstructs form the dome.

The mihrab is placed at the back of an apse-shaped bay behind the arch on the qibla side of the octagon supporting the dome. The bays behind the other seven arches of the octagon include windows admitting light into the prayer hall as well as galleries on the second level and doors leading onto porches on the first.

Behind the mosque, two madrasas of identical form occupy the corners of the complex along the retaining walls, flanking a space left open behind the qibla wall. The entrances to these madrasas are on their northwestern sides, near the sides of the mosque. They consists of open rectangular courtyards surrounded by arcades on all four sides. The arcades on the two sides of the courtyard flush with the retaining walls of the complex give onto small cells. The arcade on the side of the court facing toward the interior of the complex behind the mosque have a larger gathering room in the form of a domed cube.

A covered market occupies the retaining wall on the southwestern side of the complex. It has two arms: one running along the border of the complex from northwest to southeast and another running perpendicular to this that intersects it under a domed bay at the center.

A small school consisting of a domed cube and small portico sits on the outside of the market. 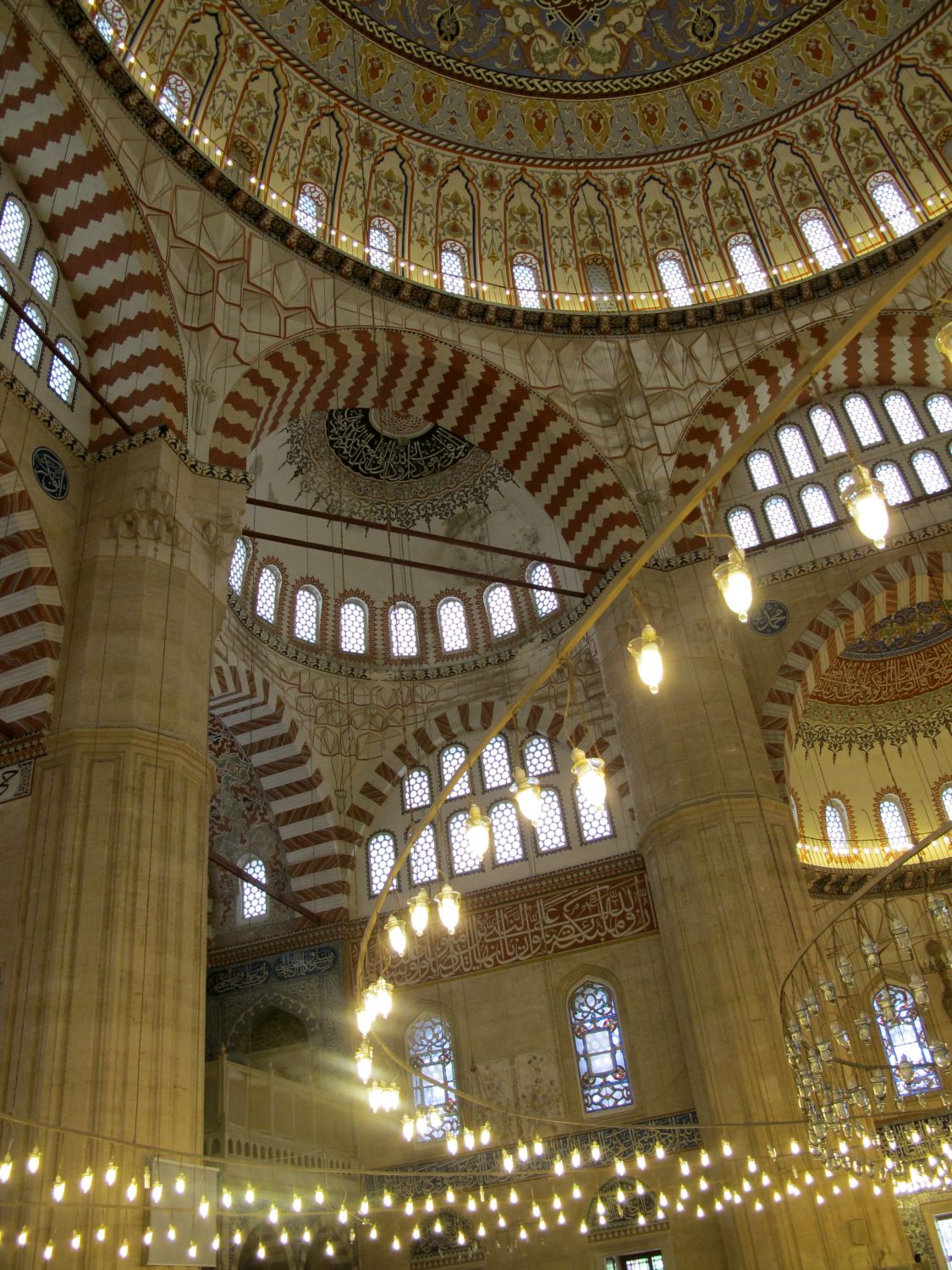