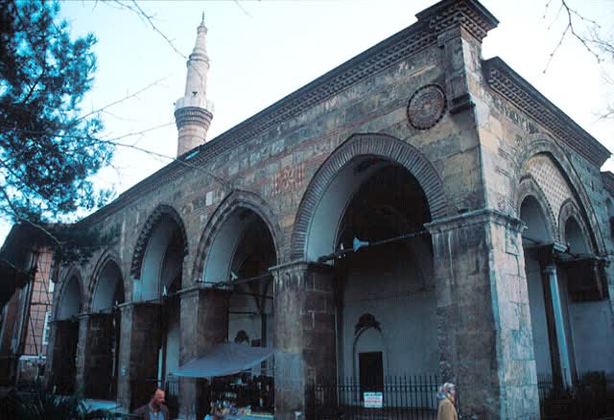 Share
The mosque complex of Ottoman sultan Orhan I, also known as the Orhaniye, was built in the market area of Bursa in 1339-1340/740 AH. An endowment deed (vakfiyye) lists a mosque, madrasa (medrese), two baths (hammam), a soup kitchen (imaret) and a caravanserai (han), of which only the mosque, a hammam and the han survive today.  The complex was burnt down during the Karamanoglu raid y in 1413 and rebuilt by Beyazit Pasha in 1417/820 AH. Severely damaged following the earthquake of 1855, the mosque was restored by French architect Parvillée in 1863-1864/1280-1281 AH, and later again in 1904/1320 AH, at which time a door was opened on the eastern wall. Thus, much of the building is restored.
The mosque was built following the Seljuk madrasa type to function jointly as a mosque for the court and a convent (zaviye) for the Ahi brotherhood. The mosque's plan resembles and inverted "T". A five-bay portico leads onto an entrance vestibule flanked by to small side rooms on the north side of the building. The vestibule gives onto a large domed bay flanked by two domed iwans on either side and a larger domed bay to the south with the mihrab. This southern portion projects from the building, forming the "base" of the T.
The interior is lit through windows on exterior walls and eight tall windows pierced into the drum of the central hall dome. On the exterior, the varying height and size of domes create a dynamic composition. The construction of the edifice is stone and brick. The mosque was originally built without a minaret, the existing minaret on the northeast corner dates from the nineteenth century.
The caravanserai or han, known as Bey (or Emir) Hani, has badly suffered from earthquake, fire, and restoration. Originally it was very grand, forty-five meters to fifty meters in area, with a stable at the rear. The stable was demolished in the fifteenth/ninth century AH to make room for the second minaret of the Ulu Cami. The han as it appears today was restored in 1959 to 1965 after a major fire that destroyed the neighborhood. It is composed of a total of seventy-four cells on two floors with gallery around a large courtyard with hexagonal basin at its center. The construction is brick and cut stone.
The earlier of the two baths built in Bursa by Orhan I, known as Eski (Old) Hammam, is located in the Hisar neighborhood in the vicinity of the historic clock tower and was entirely rebuilt following a fire. The other baths, called Bey or Orhan Hamami, is located in the vicinity of the mosque between Emir Hani and Koza Hani. The surviving men's section is now a bazaar known as Aynali Çarsi and hence lost its original function and appearance.
Sources:
Ayverdi, Ekrem Hakki. Osmanlı Mi‘mârîsinin Ilk Devri 630-805 (1230-1402), 61-89. Istanbul: Baha Matbaasi, 1966.
Baykal, Kâzim. Bursa ve anitlari. Istanbul: Türkiye Anit-Çevre Turizm Degerlerini Koruma Vakfi, 1982.