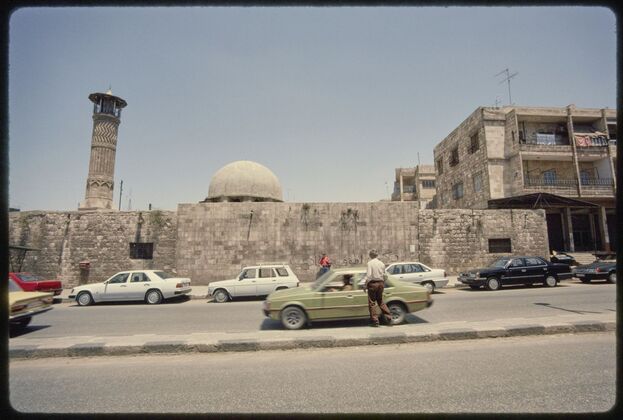 Share
Jami' al-Mihmandar, also known as Jami' al-Qadi, is a historic mosque in the northern section of the old city of Aleppo. The mosque is named after its patron, Husam al-Din Hasan Ibn Balaban, also known as Ibn al-Mihmandar. Mihmandar is a Mamluk term referring to the chief chef of the Sultan. Arabic sources on Damascus date the building to circa 1303/708 AH.
The mosque occupies an irregular plot of land. One enters the mosque through a portal on its west side set within a shallow arched iwan with muqarnas squinches. The mosque's minaret rises directly to the right of this portal. The minaret is of the Anatolian style, with a square base, octagonal drum, and cylindrical shaft ornamented with zig-zags and blind arches. It dates to later in the 14th/8th century and was not constructed as part of the original mosque.
The interior of the mosque is centered on a large rectangular courtyard from which visitors can access various rooms. The domed prayer hall is on the south side of the mosque.
The mosque is notable for a two-line inscription (undated) to the right of its entrance portal which condemns the use of images of animate beings within mosques. The inscription reads:1

Cursed is he who occupies himself with a depiction with an animate soul in the vicinity of this mosque, or he who erects an image with an animate soul in order to draw people to it or sell it/ and he who does this is in the company of those about whom it is said, "May God pray for them!" Indeed, those who possess these images shall be punished on judgment day, and it shall be asked of them, "Bring to life that which you created!" Praise be to God.