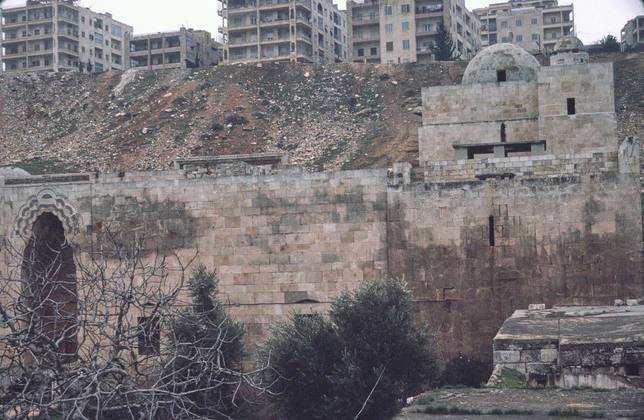 Share
Mashhad al-Husayn is one Aleppo's few remaining twelfth-century Shiite monuments. Along with the nearby Mashhad al-Dikka (Mashhad al-Muhassin), it embodies the great Shiite traditions that thrived in Aleppo. The mashhad was originally founded between 1183 and 1260 to commemorate the martyrdom of Husayn, the son of Ali who was killed at Karbala'. The long construction period was due to the slow accumulation of funds from the local Shiites that required the shrine be built in stages. It survived throughout the development of the city, earthquakes and abandonment until it was almost completely destroyed in 1920 by an explosion of ammunition that was stored in the building. Using the documentation of the site by German archaeologist Ernst Herzfeld, the mashhad was reconstructed forty years later by the local Shiite community over the period of a decade.
The mashhad is composed of a shrine to Husayn and al-Mukhtar Mosque. The limestone building is built into the east-facing slope of Jabal Jawshan. It is entered through a large walled enclosure on its east side which sits on a platform rising above the slope of the mountain. On the west side of this enclosure is the facade of the main building (its eastern facade), which includes at its center an ornate entrance portal that takes the form of an iwan vaulted with muqarnas and decorated with stonework.
From the enclosure, the main portal of the shrine building leads onto the eastern side of a rectangular courtyard. The courtyard is framed with a large iwan on the west side, the main prayer hall on the south, and a service core behind a domed portico to the north.
The main prayer hall was the first part to be built and the main iwan was the second. As contributions increased, architectural elements were modified and magnified to become larger and grander with more intricate stone muqarnas ornamentation on the portals and under the domes. The smooth monochrome mihrab in the prayer hall is not marble typical of Ayyubid mihrabs, but rather intricately formed by interlacing pieces of limestone.
Mashhad al-Husayn exemplifies the architectural mastery of form and ornament of twelfth century Aleppo, while politically it played an important role as it exposed the rift between the Sunni ruling class and the Shiite community who founded the monument. The Sunni leaders contributed to the expansion of the shrine and inscribed their names on its stones to claim the shrine as a united Muslim one and to mark their authority over the grand monument. Yasser Tabbaa explains that the Mashhad al-Husayn had a wider impact on the development of Aleppo's Sunni Ayyubid monuments and madrasas around Maqam Ibrahim (shrine of Abraham) as a direct reaction to the threat that Mashhad al-Husayn posed to Sunni authority. In this instance, an architectural structure renders both the cultural history of its material construction and the political impact of a structure on the social conditions of the city.
In the 1990s a large canopy supported by a steal frame was constructed over the courtyard of the shrine building.