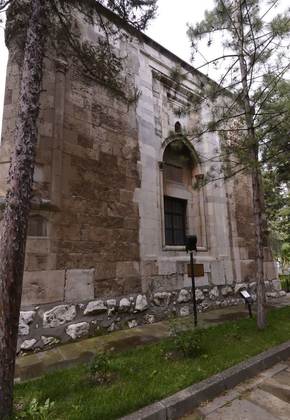 The building known today as Torumtay Türbesi (the Torumtay Tomb) is situated on the same wooded lot as the Gökmedrese, which is located toward the western end of what was the ancient city of Amasya on the south bank of the Yeşilırmak. Its north side faces the main portal of the madrasa. The monument is named after its patron, the Seljuk governor of Amasya Seyfeddin Torumtay (Sayf al-Din Turmutay), who is credited in a foundation inscription on site as having founded the building in 1278-1279/677 AH.

The original function of the building is debatable, and it is not clear that it was founded strictly as a türbe (tomb or mausoleum), although it does contain cenotaphs. An endowment deed refers to the building as an ‘imara, a generic term that came to have the meaning in medieval and early modern Turkey of a lodge, convent, or charitable soup kitchen. The deed also mentions that one of its functions was indeed to be a food distribution center for the poor. Some scholars have thus interpreted the Torumtay Tomb a lodge for dervishes.1 This interpretation is supported by the important function that dervish lodges played in medieval Anatolia as centers of social and community life.2 It is also worth noting that the building's function as a tomb would not have precluded other functions, such as that of a lodge or soup kitchen.

The building is a rectangular block supported on its east and west sides by three buttresses: two on the corners of the building and one in the center of the wall. The buttresses on the northeastern and northwestern corners take the form of engaged pillars with polygonal forms whose upper reaches distinguished by carved architectural ornament in the form of frieze bands containing geometric, calligraphic and vegetal palmette motifs. The north facade framed by these two pillars contains a large window set within an arched recess. Within the recess, a plaque bearing the foundation inscription surmounts the window, as well as a roundel carved with a palmette pattern. The south, east and west sides of the building also have large windows set into arched recesses. Each side has one such window.

The building is entered via a door on the east facade, reached by a flight of stairs. This door gives onto the main chamber, whose floor is about two meters above ground level. It is rectangular in form and covered by a pointed barrel vault. Nine cenotaphs occupy the center of the room. The bodies that these cenotaphs represent are said to be buried under the lower level of the building, which contains a cellar space.