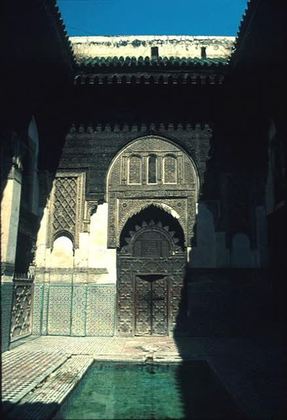 Share
Madrasa al-Sahrij is one of two connected madrasas built near the Mosque of al-Andalusiyyin by the Marinid heir to the throne 'Ali b. 'Uthman II, Abu al-Hasan (r. 1331-1348). Madrasa al-Sahrij was finished first in 1321/720 AH, and Madrasa al-Sebai'yin was completed two years later. Madrasa al-Sahrij was first known as al-Madrasa al-Kubra (the Great Madrasa), because it was larger than the other madrasas which were built at the same time. It came to be known later as the Sihrij Madrasa in reference to the large rectangular water basin (Arabic sihrij) that occupies the center of its patio.

The plan follows the ubiquitous model of Marinid madrasas in Fez: a rectangular court is surrounded on its lateral sides by galleries giving onto student rooms, and a wide but shallow prayer hall.

The central courtyard is lavishly decorated with carved stucco, glazed tiles, and carved cedar wood, characteristic of the Marinid translation of Nasrid palatial materials and techniques into a religious context. The contrast between sumptuous ornament in the courtyard and the spartan accommodations for the students in all of the Marinid madrasas may reflect the multiple functions of these buildings. The madrasas often served as mosques for their respective quarters and as settings for official ceremonies. With the addition of associated charitable functions like guesthouses and waqfs, or endowed properties which supported the madrasa's upkeep, to their primary role as religious schools, the madrasas functioned as important centers of community life. The courtyard, as the most public of the spaces within the madrasa, was therefore the focus of the ornament that would highlight the generous image of the madrasa's founder.

Since 2000 there have efforts to preserve and restore the madrasas, as well as vandalism and theft.