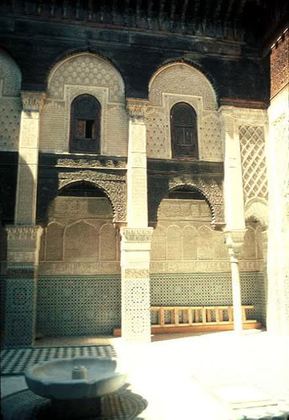 Share
The al-Attarin Madrasa was commissioned by the Marinid Sultan Uthman II b. Ya'qub, Abu Sa'id (r. 1310-31) in 1323/723 AH and completed in 1325/725 AH. It is located in the spiritual centre of Fez, near the Qarawiyyin Mosque. The madrasa's location at the entrance to the spice and perfume market gives al-Attarine, the madrasa of the perfumers, its name.

The Marinid Sultans were prolific patrons of madrasas, which served to promote Sunni teachings during their reign, perhaps meant to counterbalance thriving local Sufi practices. The al-Attarin madrasa, like the other Marinid madrasas of Fez, is celebrated for its rich decorative programme, concentrated in the rectangular arcaded courtyard. The courtyard opens onto a square prayer hall, and is luxuriously ornamented with glazed tile (zellij) dados and pavement, intricate carved stucco ornament on walls and piers, carved and painted wooden arches and cornices, and marble columns. The al-Attarin Madrasa, and the other Marinid madrasas, illustrate the translation of a palatial language of materials and decorations into a religious setting. Though the carved stucco and glazed tile revetment clearly evoke the Nasrid palace of Alhambra in Spain, their highly delicate, almost lace-like, treatment and tendency to ever-smaller scale is unique to the Marinid foundations in Morocco.

The contrast between sumptuous ornament in the courtyard and the spartan accommodations for the students at the al-Attarin and the other Marinid madrasas may reflect the multiple functions of these buildings. The madrasas often served as mosques for their respective quarters and as settings for official ceremonies. With the addition of associated charitable functions like guesthouses and waqfs, or endowed properties which supported the madrasa's upkeep, to their primary role as religious schools, the madrasas functioned as important centers of community life. The courtyard, as the most public of the spaces within the madrasa, was therefore the focus of the ornament that would highlight the generous image of the madrasa's founder.