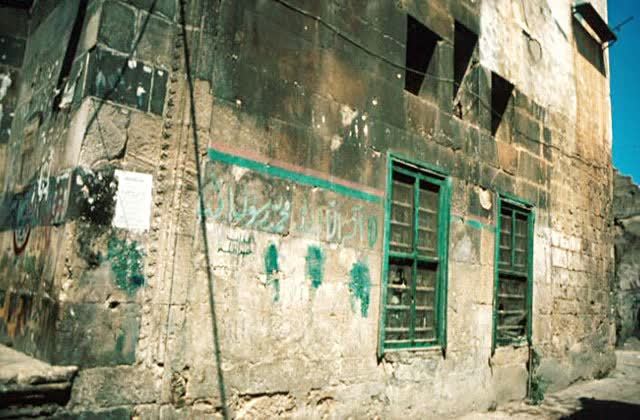 Share
"The Attar mosque is one of the largest mosques of Tripoli. Still in use today, it is regarded as the third most important mosque of the city. in 1700, al-Nabulsi listed it as the eighth in importance of the twelve mosques where Friday prayer was held (Nabulsi 1971). Literary evidence suggests that it was also an important mosque during the Mamluk times.

An inscription above the door of the main portal, a line of naskh script, reads:"In the name of God the Merciful, the Compassionate, this blessed door and the minbar are the work of master Muhammad ibn Ibrahim the architect, in the year seven hundred and fifty-one [A.D. 1350]."

The architect named could have built either the original mosque or a later restoration. But a Mamluk account by al-Dawadari in Al-Durr al-Fakhir reports the building of a mosque in Tripoli by a rich perfume merchant in the year A.H. 751, so it is safe to assume that the date on the inscription is a founding date of the building, and that the benefactor was Badr al-Din ibn al-Attar, a prosperous perfume merchant and son of another perfumer as his name, ibn al-Attar, indicates. According to al-Nabulsi, "the al-Attar mosque was known to have been a [Crusaders'] church and a man who was a perfumer spent money in secret on its building, hence it was named after him." The fact that he spent money on it "in secret" could explain the omission of his name from the founding inscription. Since the perfumer donated his money anonymously and the mosque is not in the Suq of the Perfumers, it was clearly not built to be the mosque of the perfumers corporation, as Sobernheim seems to conclude. Its anonymous benefactor simply happened to be a perfumer who helped finance the mosque. In time his identity was revealed, and the mosque was then named after him.

The inscription in the bay of the main portal on the right wall, 2 meters above the ground, consists of two lines of naskh script, and records a decree of A.H. 821/A.D. 1418 which refers to the monument as the Jami al-Attar. The inscription reads: "On the date of the first tenth of Rabi al-awwal of the year eight hundred and twenty-one [April 8-17, 1418], the royal edict of Sultan al-Malik al-Muayyad Abu al-Nasr Shaykh arrived which decreed that nothing should be levied from the inhabitants of the waqf of Jami al-Attar by the inspectors; that there should be no auctions and no injustices; that the requests of those praying may be granted. Those who comply would be compensated, and those who oppose would draw upon themselves the anger of God and the maledictions of all angels and all men. Amen."

From the text it is clear that within about sixty-eight years of its building, the mosque was already being called the Jami al-Attar, and that its waqf had attracted the attention of administrative officials, as was often the case with many buildings (the Qartawiyya is the most obvious example in Tripoli).

A third inscription is on a muqarnas decoration above the lintel of a door on the western side of the mosque. It apparently went unnoticed by Sobernheim and those who followed him, but was finally recently published by Tadmuri (Tadmuri 1974). It is in a primitive script that reads: "This is the work of Abu Bakr ibn al-Basis, may God have mercy on him." Abu Bakr ibn al-Basis. was a known and active architect of the time, who was often called upon to do difficult jobs such as the building of the Damur Bridge. In his Tarikh Bayrut, Salih ibn Yahya, writing about the events of A.H. 745 (A.D. 1344), reports that "Abu Bakr ibn al-Basis al-Balabaki is an expert architect in coastal works; he is the one who built the Nahr al-Kalb Bridge and other difficult works in the lands of Tripoli." So two architects worked on the mosque and were moved to sign their name to it. One of them was famous; one otherwise unknown.

From the outside the mosque blends into its surroundings and does not stand out as an independent structure, but three elements-the eastern main portal (the single most impressive element of the al Attar mosque), the western side entrance, and the minaret-distinguish the building from its surroundings by their size, decoration, and quality.

The main portal of the mosque opens onto the northern third of the prayer area and faces east. It is a monumental and ambitious achievement, not part of a composed and organized facade, but an independent element that provides the focal point of the building. It is a tall, rectangular composition, higher than the mosque proper, carefully constructed and richly decorated. It is built of alternate courses of black and light-colored well-cut stone and framed by two rows of stone molding. The decoration is restricted to the inner surface of the portal above the rectangular door.

The opening of the door is spanned by a simple one-stone slab lintel, topped by a row of decorative ablaq just below the founding inscription, above which is a square polychrome plaque; the whole is crowned by a muqarnas niche. The course of ablaq, of the elaborate fleur-de-lys variety, runs the width of the opening above the lintel. The square plaque of polychrome marble is a masterpiece of craftsmanship and the focal point of the portal. It consists of an inner circle of deep red marble surrounded by a stone carved palmette motif, enclosed in turn by a plain band of marble. This circle forms the core from which radiates and toward which converges a complex system of double interlocking bands studded with fleurs-de-lys pointing like arrows toward the inside circle and the outer square. This decorative plaque is set in a stone frame on the wall above the door and below the muqarnas niche.

The crowning muqarnas niche consists of four rows of a muqarnas motif, running on the three sides of the inner portal and surmounted by a plain yet powerful half-dome. The first row consists of two corner niches with a shell half-dome flanked by two double-arched motifs; at the center of this row and at the two ends toward the exterior are plaques of a complex carved star-shaped Mamluk motif. The second row consists of central and side double arches with a corner stalactite; the third row alternates plain crossed double arches with stalactite double arches. Finally, the top row consists of narrower alternating flat and concave trilobed arches, the concave motif crowning the flat double arches of the lower row. The effect is of a rich and very well built stone muqarnas zone between the flat wall below and the half-dome above.

The western door is clearly the side door to a mosque, but it still stands out from its surroundings by three horizontal rows of muqarnas above the lintel to suggest that it leads into some special place. The lowest row has wide arches; the second row has a simple attempt at stalactites; and the top row uses a simple scale motif. Since this wall of the building has been repaired and replastered many times, it is hard to tell whether or not what we now see is complete (which could well be the case) or whether it was once more highly decorated. The architect Abu Bakr ibn al-Basis. was in any case proud enough of it to sign it, as we have seen.

The third distinguishing element, the minaret, is a true landmark. A square tower of sandstone, it is considered one of the most important minarets in the city. The square shaft has two rows of horizontal molding that divide it into three parts opened at irregular intervals by small, star-shaped windows. The shaft is topped by a slightly wider cubical unit which rests on a muqarnas frieze above four engaged colonnettes. It is open on each of its four sides by a double arched window divided by a central column and is topped by a balcony with four corner knobs. A later addition to the minaret is an octagonal shaft covered by a conical dome.

From even a cursory glance at the plan of the Jami al Attar, it is apparent that the interior of the structure bears no resemblance to any common or even known mosque type. Essentially it is a long rectangular space (about 22 by 14 meters) with openings onto it. The main entrance follows the street line and is set at a slight angle to the mosque. The gate leads into an almost square entrance with cross-vaulting, which in turn leads into a prayer hall; a door on the north side leads into a large, almost square ablution room.

The central prayer area is rectangular and is covered by a simple long vault, except for the axis between the main eastern portal and the side western entrance which is more elaborately covered with a central high dome flanked by two vaulted areas. The dome has a cupola with a central octagonal opening, resting on an octagonal zone of transition with eight windows set in double frames; this transition area rests on four plain pendentives placed between the vaulted areas.

The western side of the rectangular hall has three three-sided, simple vaulted iwan-like rooms opening onto it. The central one is the largest of the three and gives access to the outside through an arch of thick masonry.

The eastern side has only one iwan-like room and two windows opening onto a garden. The three western iwans and the eastern one must be the "four platforms" mentioned by al-Nabulsi in 1700: "In this mosque, there are four platforms [suffah]; each platform has its own teacher, who receives a salary provided for by the waqf of the mosque.""

Salam-Liebich, Hayat, 1983. The Architecture of the Mamluk City of Tripoli. Cambridge: The Aga Khan Program for Islamic Architecture.