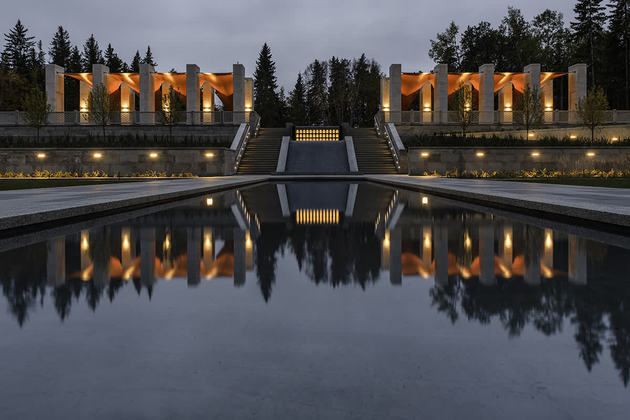 The Aga Khan Garden brings to life the principle of pluralism, of which His Highness has been a life-long advocate. In the 4.8-hectare Mughal-inspired space, traditional Islamic landscape design takes on strikingly contemporary features. Garden elements from some of the world’s best Muslim architecture, including the Taj Mahal and Humayun’s Tomb in India, are interspersed with distinctively Canadian features, from Alberta’s wild rose beds to Canadian-quarried stonework.

Speaking at the ceremony, Premier of Alberta Honorable Rachel Notley called the Garden "an oasis and a sign of Alberta’s welcome to the world," she said that "we stand with you to build a fair and more inclusive world". In his remarks at the inauguration ceremony, His Highness spoke of his happiness in seeing the Garden come to fruition, and of the place, throughout history, of the Islamic garden in reminding us of the notion of good stewardship of the earth and "our responsibility to honor, to protect, and to share the gifts of the natural world". In considering the role that such green spaces may play, His Highness spoke of the Garden as a social space, "a place for learning, for sharing, for romance, for diplomacy, for reflection on the destiny of the human race".

Designed by the renowned landscape architecture firm Nelson Byrd Woltz in collaboration with the Aga Khan Trust for Culture (an agency of the AKDN), the Garden provides a stunning example of Islamic landscape architecture that explores the beauty and boundaries of vegetation, light, water, geometry, symmetry, adaptation and human scale. The serenity of nature is highlighted in each of the design elements including secluded forest paths, granite and limestone terraces, still pools that reflect the prairie sky and a waterfall that tumbles over textured stone.

The design of the Aga Khan Garden, Alberta, is inspired by Mughal garden tradition and is laid out in three parts: woodland valley, central court and pond framed by an orchard. From a natural rise at its south-west end, it unfolds in rectangular terraces down to the Calla Pond. On the highest point of the rise stands a pavilion that enjoys a sweeping vista of the Aga Khan Garden. From this plaza, water emerges from a fountain and runs through a stone-lined channel from one terrace level to the next. It fills a square basin in the chahar-bagh on the lower level, and then falls gently into Calla Pond.

At that moment, the Aga Khan Garden transitions from a highly structured rectilinear scheme to a looser, curving, more apparently naturalistic design of the bustan, a fruit orchard that extends around the Calla Pond. The Garden contains more than 25,000 trees, shrubs, perennials, annuals and wetland plants, selected for fragrance, beauty and the ability to thrive in Alberta’s climate. Twelve water features and fountains are sprinkled around the Garden, which took 18 months to construct.