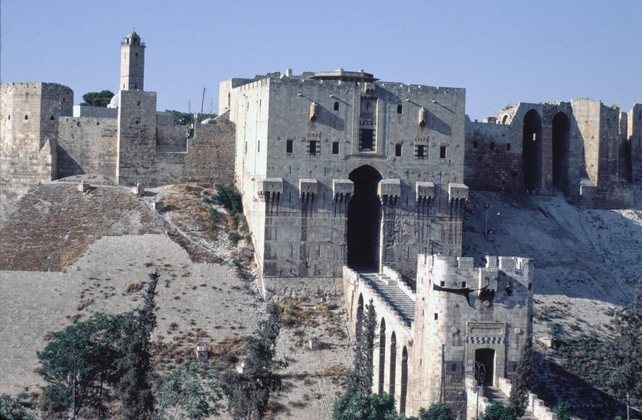 Share
The monumental entrance complex to the Citadel of Aleppo is perhaps its most striking architectural feature. Construction was completed under the reign of Ayyubid sultan al-Malik al-Zahir Ghazi (r. 1186-1216) and likely initiated by the same ruler as a renovation project for an older, less secure gate.1 The entrance block was further enhanced during the Mamluk period through a number of building campaigns outlined below.
Situated on the south side of the elliptical mound, it consists of an upper and lower tower bridged by a stone viaduct carried on seven arches. These elements provide a secure entrance to the fortification and create an imposing facade for those approaching the mound.
The lower tower or barbican is a rectangular structure with curved front corners preceded by a flight of stairs from street level. A large iron gate at its center gives access to the tower and viaduct beyond. The gate is surmounted by a lintel consisting of joggled black and white stones and an Arabic inscription. The top of the tower is equipped with battlements, windows for shooting arrows and a machicolation that projects over the gate. The inscription on the cartouche above the door indicates that the rebuilding of the tower (tajdid 'imaratihi) was commanded during the reign of Mamluk Sultan Qansuh al-Ghuri in 1507/913 AH. Thus the tower was not part of the original Ayyubid structure but replaces an older structure.2
The viaduct carries visitors over the moat and ascends in elevation toward the upper tower, which projects out of the glacis. As it stands today, the upper tower is a large multi-storied, square block. It is in fact made up of two sections: the lower story is Ayyubid and the upper story rising above the machicolations is an addition made during the Mamluk period.
The original Ayyubid structure consisted of two projecting salients equipped with machicolations between which was an open pathway toward the second major gateway in the entrance block: the Serpent Gate. This gate opens from the right salient at the rear of the pathway and is named for its archivolt, onto which intertwined dragons or serpents are carved. It too originally contained a large iron door. Passing through the Serpent Gate, one entered a series of hallways at right angles to one another that ascend further up the glacis, creating a ramp with multiple bends. At the end of this bent ramp is the third and final gate, the Gate of Two Lions or Lion Gate, distinguished by two sculptures of lions that flank the portal.
During the Mamluk period, a palace was built atop the aforementioned Ayyubid structure, transforming the upper block into one large square tower. The uncovered space between the Ayyubid salients was vaulted, becoming a covered pathway leading to the Serpent Gate. In 1406-7/809 AH, Mamluk sultan Sayf al-Din Jakam began construction on this palace but the building remained incomplete upon his death. Further enhancements were made under Mu'ayyad Shaykh in 1417/820 AH and Qansuh al-Ghuri, who replaced the hall's wooden ceiling with stone vaults in 1510/916 AH, at which point the audience hall took its final form.3 The plan of the palace consisted of a square audience hall surmounting the Ayyubid towers which was preceded by a forecourt. The forecourt was reached through a portal with ablaq decoration and the audience hall through an even more monumental portal with ablaq decoration and a muqarnas hood.
In 1964, the audience hall of the Mamluk palace was renovated and a modern wooden roof in the style of those found in 19th-century wealthy Damascus homes was installed.4
Notes:
Sources:
Allen, Terry. Ayyubid Architecture. Occidental, CA: Solipsist Press, 1999.
http://www.sonic.net/~tallen/palmtree/ayyarch/
[Accessed May 17, 2017]
Herzfeld, Ernst. Matériaux pour un Corpus inscriptionum arabicarum. Part 2: Syrie du nord. Inscriptions et monuments d’Alep. 2 vols. in 3 parts. Cairo: Institut Francais d'archéologie orientale, 1954-1956.
Meinicke, Michael. Die Mamlukische Architektur in Ägypten und Syrien (648/1250 bis 923/1517). Glückstadt: J. J. Augustin, 1992.
Tabbaa, Yasser. Constructions of Power and Piety in Medieval Aleppo. University Park, PA: Pennsylvania State University Press, 1997.
Geonames URI: http://sws.geonames.org/7674792/