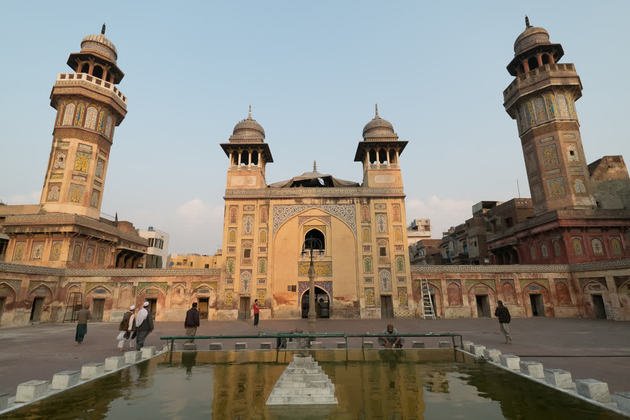 Since 2007, the Historic Cities Programme of the Aga Khan Trust for Culture has engaged itself with the rehabilitation of the Walled City of Lahore, and the conservation of its Mughal period monuments in active partnership with the Government of Punjab.

Hakim ‘Ilmuddin Wazir Khan, the Subedar of Lahore in the reign of the Emperor Shah Jahan, built this mosque and its associated structures in 1044-45 AH (1634-35 CE). Located about 260 meters inside Delhi Gate, this was the largest mosque in Lahore at the time, with the construction of the Badshahi Masjid still fifty years away.

The complex included the mosque itself, the introductory space of Chowk Wazir Khan, and a double row of shops integrated in the entrance system meant specifically for calligraphers and bookbinders. The trust included additional shops on the eastern and northern facades built into the body of the monument, a serai, a public bathhouse (the Shahi Hammam), open land and two wells, all bequeathed to the mosque by Wazir Khan for its upkeep and maintenance. During the Mughal era, the hujras which lined the forecourt (which could also have been the serai mentioned in the deed), also served as alcove spaces for traditional craftsmen to sell their goods.

The profuse architectural decorations that embellish the exterior and interior surfaces of the mosque are the singular outstanding attribute that places the mosque in the frontline of the major monuments of the world. This extensive ornamentation includes glazed tile mosaics (kashikari), frescos (naqqashi), traditional engraved lime plaster and cut-and-dressed brickwork. Delicate calligraphy in Arabic and Persian depicts verses from the Quran and the Hadith, contains references to the date of the construction of the mosque, and acknowledges its builder and the Emperor.

In 2009-2010, a comprehensive documentation and condition assessment of the Wazir Khan Mosque was carried out by AKTC/AKCS(P), in partnership with the Government of Punjab, the Sustainable Development of the Walled City of Lahore Project (precusor to the Walled City of Lahore Authority), and co-funded by J.M.Kaplan Fund and AKTC. This was published in 2012, detailing the range of problems and issues faced by the mosque leading to  developing a cost-estimate of US$6.4 million for its conservation.

Work was initiated in phases, in an attempt to comprehensively revive and reclaim this historic complex. The complex comprises the mosque, its forecourt, and its open land in the south which is now heavily encroached upon by residential buildings.

The first phase from 2014-2016 was the conservation of the mosque’s 85-meter long northern façade which runs along side a portion of the Shahi Guzargah known as the Kotwali Bazaar. This façade originally contained shops at street level which were rented out to provide for the upkeep and maintenance of the mosque. Over the centuries the street level had risen by a good 2 metres and the shops had grown out of the original façade as encrustations on the façade that also occupied a considerable part of the public right of way. Through this conservation project, the encroaching shops were removed, the historic shops with the original street level were restored and the full façade of the mosque exposed. This necessitated the separation of the present street level from the 17th century street by the use of retaining walls. AKTC/AKCS(P) carried out the project in collaboration with the Walled City of Lahore Authority and with financial assistance of US$230,000 from the Royal Norwegian Embassy, Islamabad.

In the second phase, conservation of the Chowk Wazir Khan, the 800 square meter historical forecourt to the mosque, by  reclaiming and rehabilitating this urban space by lowering the square to its original historic level, restoring the eastern façade and hujras (chambers) of the Wazir Khan Mosque, conserving the Calligraphers’ Bazaar and the Dina Nath Well was initiated in the last quarter of 2015 with co-funding of US$1.19 million from the US Ambassador’s Fund for Cultural Heritage Preservation.  The project once complete in May 2017 will result in the conservation and display of the mosque’s magnificent main, eastern façade, and certain other elements in the forecourt such as the 19thcentury Dina Nath Well and significantly will yield a tranquil below grade court space which will be used for congregational and festive occasions. Restoring the Chowk Wazir Khan will provide the residents and visitors of the Walled City with a designated, well-maintained and well-furnished public space where cultural, social and controlled commercial activities can take place in a historical setting.