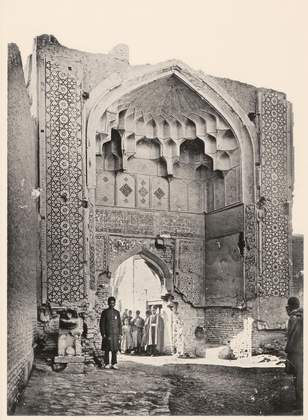 The structure known as Darb-i Kushk consists of the remnants of a monumental portal spanning a narrow street west of Isfahan's Chahar Bagh Avenue. Inscriptions found on site indicate that the portal originally functioned as the entrance to a complex that contained a zawiyya and a tomb chamber for the father of the patron, who identifies himself as Zayn al-Dawla wa'l-Sa'ada wa'l-Din 'Ali Beg Borna. The inscription also bears the date 902 A.H. The name Darb-i Kushk is attributed to the fact that Kushk was the name of an ancient neighborhood in Isfahan.1 The location of the monument and the surrounding area (also known as Darb-i Kushk) is visible on detailed survey maps of Isfahan.

Nothing is left of the zawiyya itself and very little of the original portal remains, its condition having deteriorated over time, and its tile mosaic decoration having been removed during the middle of the twentieth century and remounted on a reconstructed model of the portal in the garden of Isfahan's Chihil Sutun Museum.2

The portal originally took the form of a large arched iwan framed by pishtaq. The interior of the iwan was vaulted with a semi-dome. A photograph published by Friedrich Sarre in 1901 shows the semi-dome intact, demonstrating that it rose from muqarnas squinches that gave way to a vault constructed of bricks arranged in a herringbone pattern and emanating from a many-pointed star.3 The muqarnas vaulting had little decoration, but the zone immediately below featured diamond-shaped medallions of square Kufic calligraphy. The lower half of the iwan interior as well as the façade of the pishtaq were once decorated extensively with tile mosaic revetments. The interior walls of the iwan had dadoes with a geometric motif originating from an eight-point star, and these were surmounted by the inscription band. The façades of the pishtaq flanking the iwan opening were decorated with a geometric pattern based on a ten-point star.

By 1976, when the site was photographed by Lisa Golombek, the semi-dome had completely disappeared from the in situ portal, and almost all of the tile decoration, save for a few scraps, had been removed for reinstallation in the model constructed in the Chihil Sutun gardens.