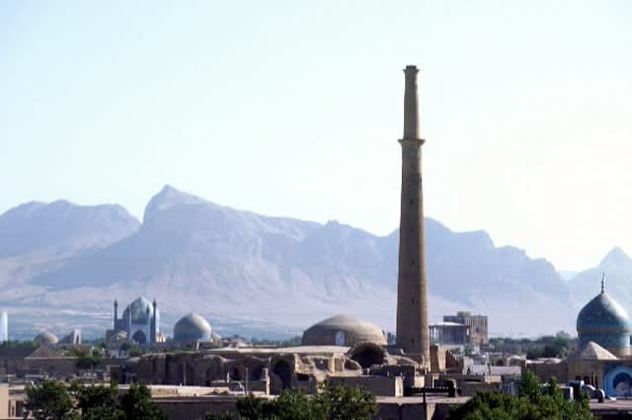 Share
The Ali Mosque and Minaret were built during the rule of Seljuk sultan Sanjar (1118-1157) in the mid-twelfth century. The minaret retains its Seljuk decorative brickwork while the mosque was largely rebuilt and redecorated during the rule of Safavid Shah Ismail I (1501-1524).

The mosque is based on the four-iwan typology, with vaulted prayer halls centered on iwans on four sides of an open courtyard. The qibla wing to the south of the courtyard has a domed sanctuary with a mihrab and minbar. The street elevation is composed of an arched portal recess flanked by two shallow niches of equal size and a narrow panel with a blind arch. It is covered entirely with tile mosaics and tile panels featuring floral and geometric motifs in turquoise, blue and white. A gilded thuluth inscription, signed by calligrapher Shams al-Din Tabrizi, envelops the interior of the portal recess; it commemorates the Safavid reconstruction by master builder Mizra Kamal al-Din. The ribbed star vault of the portal is also decorated with tiles, including a panel above the doorway signed in 1522 by tile-cutter Musaddiq. Blue and turquoise tiles were also used on the exterior of the sanctuary dome, which features large floral motifs and a broad inscriptive band with white kufic characters.

The Seljuk minaret rises immediately to the right of the mosque portal and is built entirely of brick. It is about forty-eight meters tall and has a tapering cylindrical shaft interrupted by two balconies. The shaft below the balconies is decorated halfway with a pattern of interlocking stars in recess, changing into a finer diamond pattern in the upper half. The minaret has four bands of Kufic inscriptions, three of which are highlighted with glazed tiles.