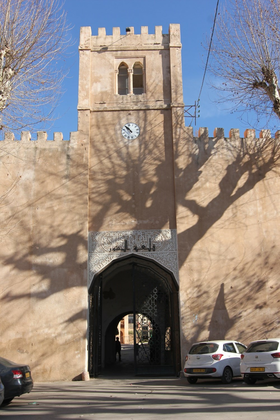 Share
The Mechouar is a fortified palatial complex located in the heart of the old city. It was the seat of power of the Zayyanid (or 'Abd al-Wadid) dynasty, and a castle that allowed the sultans of Tlemcen to retreat in troubled times. However, the term Mechouar is not unique to Tlemcen. It was a very common name in the medieval cities of the Maghreb. Meaning council chamber, it was often given to sultans’ palaces, and seats of governments.
In Tlemcen, although the area was first a residence of the Almohad governors, it was the Zayyanid sultan Yaghmurasen Ibn Zyan (1239-1282) who laid its first foundations by making it his official royal residence. His successors added many buildings: the sultan Abu Hammou Moussa I built a mosque in 1317/717 AH; the sultan Abu Tashfin endowed it during his reign (1318-1337) with several palaces and gardens; Sultan Abu al-Abbas surrounded it with a wall in 1446/850 AH.
The rampart wall is crenellated and high, reaching in parts a height of 14 m. Its plan forms a quadrilateral measuring approximately 250 m by 150 m, making the Mechouar the largest royal citadel in Algeria. The north and west ramparts have irregular profiles and follow crooked lines. The northern rampart wall shows an avant-corps flanked by two massive circular towers of Almoravid inspiration.
During Ottoman rule, the Mechouar experienced a profound decline. The buildings fell into ruin; only the ramparts continued to be well-kept. After the French occupation, the Mechouar became a barracks and military hospital. During this period, French military demolished all the houses and palaces within the walls, and added two meters wide chemin-de-ronde all along the ramparts.
A few years after the independence of Algeria, the Mechouar was listed as a historic site. In 1990, all French-era buildings were demolished when the Algerian National Army granted the site to the civil administration, who installed in the citadel the regional office of the National Agency for Archeology and Protection of Historic Monuments. Between 2002 and 2012, the site episodically underwent restoration and reconstruction works, to get it ready for the event “Tlemcen: Capital of Islamic Culture 2011.” However, these restorations have been much criticized for their lack of authenticity.